Rarotonga is the main island of the Cook Islands, and features a stunning volcano in the middle of the island called Te Manga, sitting 658 meters above sea level. The Cook Islands comprise fifteen main islands covering an area of 690,000 square miles (the size of Greenland).

The moment you walk off your airplane, you will be overwhelmed by the wonderful aroma of frangipani, before being greeted by beautiful locals, and garlanded with traditional ‘ei’, (Rarotonga flower necklace). The atmosphere of unspoiled paradise will immediately envelop you, the stress and strain of daily life falling off your shoulders before you even get to your hotel destination.

This is an island that personifies picturesque, untouched beauty. You will not see high-rise Las Vegas here, nor will you ever experience New York traffic jams. There are two bus routes; clockwise and anti-clockwise. With one main road circling the entire island, it will take you around 30 minutes to do a complete circuit.

There are no Visa requirements

A visitor permit is granted to all nationalities upon arrival to the Cook Islands and is valid for 31 days. You will only need a valid passport and a return or onward destination ticket, with a pre-booked hotel or resort. Just take your papers and a smile.

Should you want so extend your stay, there are a couple of options. You will have to visit the Ministry of Foreign Affairs and Immigration, which is in the capital (tuitai@immigration.gov.ck, PO Box 105, Avarua, Rarotonga). It is possible to stay for a period longer than six months, however you will need to apply in advance from your country of origin.

The currency used in Rarotonga is the New Zealand dollar. This means you get a lot more for your buck. If you buy locally made produce it will not only support the local community, but it will be easier on your wallet, as imported items are often heavily taxed.

Open every day except Sunday, the Punanaga Nui central market is the heartbeat of the island, and on Saturdays the local farmers and fishermen from the surrounding islands all arrive to sell their fresh produce. A colorful carnival atmosphere surrounds the stalls laden tropical fruits, freshly squeezed juices, and mouth-watering snacks. For those who wish to take a piece of paradise home with them, there are authentic island printed sarongs, native wood carvings, and shell art.

Pearls are making a comeback and are hitting the runways with high fashion jewelry. The South Pacific waters – in particular the Cook’s northern islands of Manihiki and Penrhyn – are home to the black-lipped mother of pearl shell which thrives in the unspoiled clear lagoons.

The natural beauty of the beaches of Rarotonga is breathtaking. Littered with native palms, the white crisp sands of Rarotonga and Aitutaki stand amongst the giants of tropical resort islands and are surrounded by coral reefs, dotted tranquil, safe lagoons.

If you are into snorkeling and scuba diving then you will find a a stunning variety of tropical marine life, and get the chance to come face to face with giant turtles, aquarium fish hovering around the achingly beautiful coral formations. 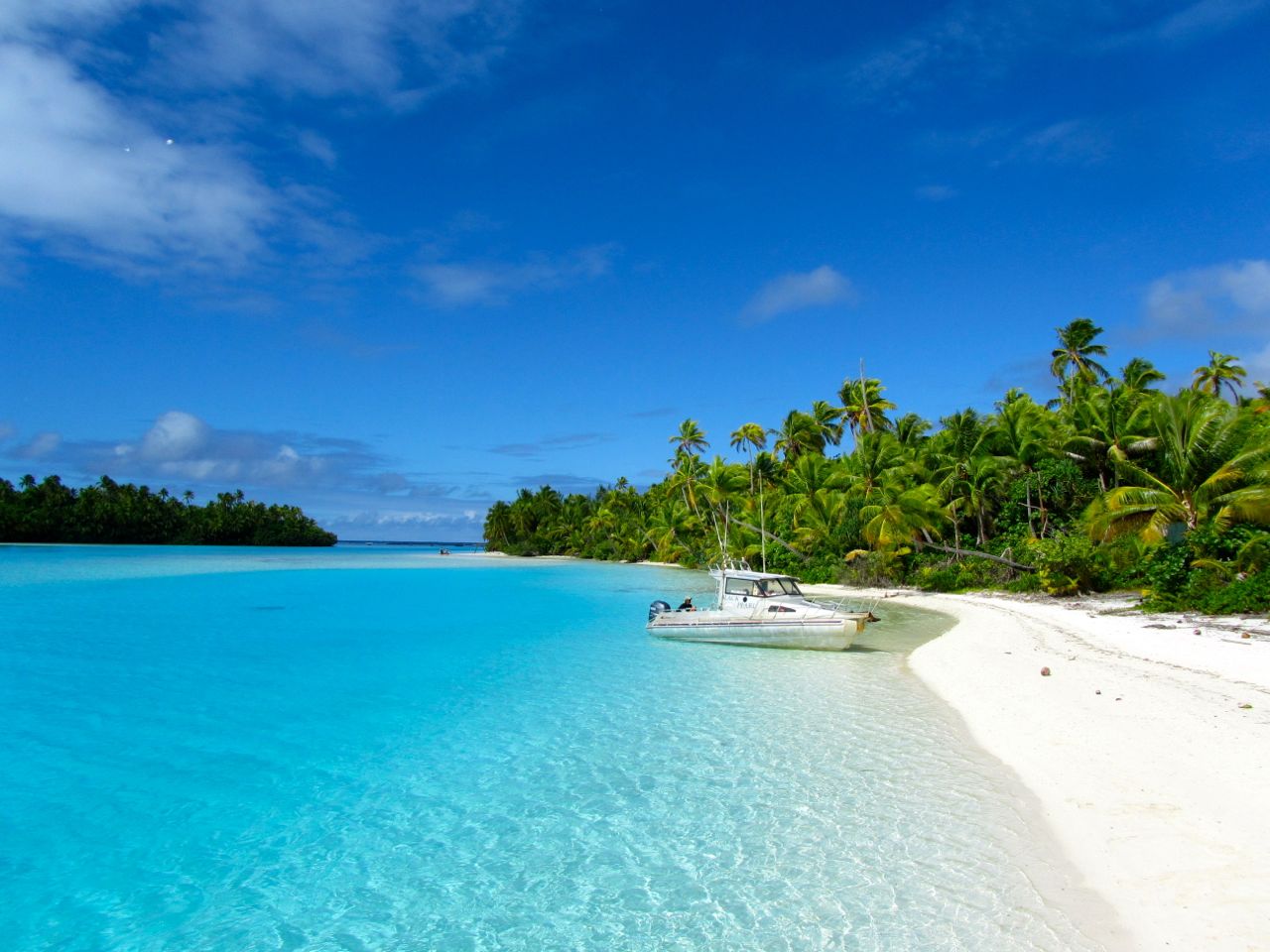 A Rich History and Culture

Rarotongans originally travelled from Tahiti around 600 ad and made the Cook Islands their home. In 1773, Britain’s Captain James Cook discovered the island chain and became a British protectorate in 1888. By the early 1900’s, the Cook Islands became a New Zealand protectorate and in 1965 developed into having it’s own Government, with a Premier, in free association with New Zealand.

Rarotonga is a long way from anywhere and is often a popular stopover for those on route to New Zealand. The only international carriers are Air New Zealand, Air Tahiti, and Pacific Blue (Virgin Australia). Air New Zealand delivers a daily flight directly to Auckland from Rarotonga as well as an indirect route which flies via Fiji, and weekly flights from LA and Sydney.

Mutiny on the Bounty – Aitutaki

The infamous ship “The Bounty” came across this magical paradise on April 11, 1789. Captain William Bligh was the first European to cast eyes on this palm tree lined island and 18 days later his crew mutinied. To this day the islands contain descendants of Fletcher Christian and Commander William Bligh [why Blight? He went home. Are you sure? Fletcher Christian, sure, but Bligh…].

Delivering complete bucket list satisfaction, Aitutaki is possibly the most beautiful place on earth. Petal-strewn bungalows flank the waters edge and honeymooners are greeted by ukulele serenading locals as they arrive at the airport, offering romantics young and old the mesmerizing beauty and delightful welcome of the island.

This is a place where wedding vows are exchanged, renewal of vows, and fairy tale honeymoons are celebrated under breeze swaying palm trees. There is a central lagoon and it’s turquoise waters are famed for its world-class snorkeling.

With more than half the nation being regular church attendees, Rarotonga is a religious place. What makes this such a wonderful cultural experience is that you will see islanders attend any of the 24 Congregational churches dressed in their finest whites and always wearing beautifully hand woven hats. The singing that surrounds the island on a Sunday morning is charming and joyfully relaxing.

Missionaries arrived at around 1827 and with them they bought previously unknown diseases. Within 20 years the population had been halved, only recovering by the turn of the new century. The missionaries were protestant and were extremely nervous about any French (catholic) interaction. A formal request was sent back to Britain and from 1865 Rarotonga came under the protection of the British.

Rarotonga has to be one of the only tropical locations in the world where you will not find rows upon rows of high-rise resort apartments and resorts. Nothing is built higher than a coconut tree and there are only a handful of luxury spas and resorts, so you can relax in unpretentious, spacious and elegant accommodation.