We arrived at Zimbabwe’s Victoria Falls airport, where the people from Bushtracks picked us up. They came in a very comfortable minivan and took us to the border with Zambia, where another person from Bushtracks was waiting for us to take us to our hotel. Keep in mind that to fly to Victoria Falls, you can also fly to Livingstone (Zambia).

Along the way, we saw a lot of vegetation and many baboons, quickly realising it was going to be an amazing trip. At the border, they did all the paperwork for us, which made everything really easy. After 15 minutes, we arrived at our destination.

When we arrived to AVANI Victoria Falls Resort, the wonderful Joyce was waiting for us, Head of Public Relations. Joyce was radiant and smiling. We quickly completed the check-in and she herself escorted us to the room.

The room was huge and had a special and magical Moroccan feel to it. It was a suite with a large living room and a very spacious bedroom with views on both sides to the lake and the garden.

We talked about our itinerary for the next day and went to freshen up a bit for dinner. We dined at the hotel buffet, which was impressive with a ton of variety.

We tried unusual things like fried worms (yes, worms) and a traditional fish called Kapenta with salad and a special type of mashed potatoes. Then we went to sleep and got ready for the next day of adventures.

As soon as we got up, we went to breakfast and were greeted once again by Joyce, who gave us some instructions. Before starting our adventure, we had a massage at the hotel next door, the Royal Livingstone Hotel by Anantara, which was literally a 3-minute walk from the AVANI Victoria Falls Resort. 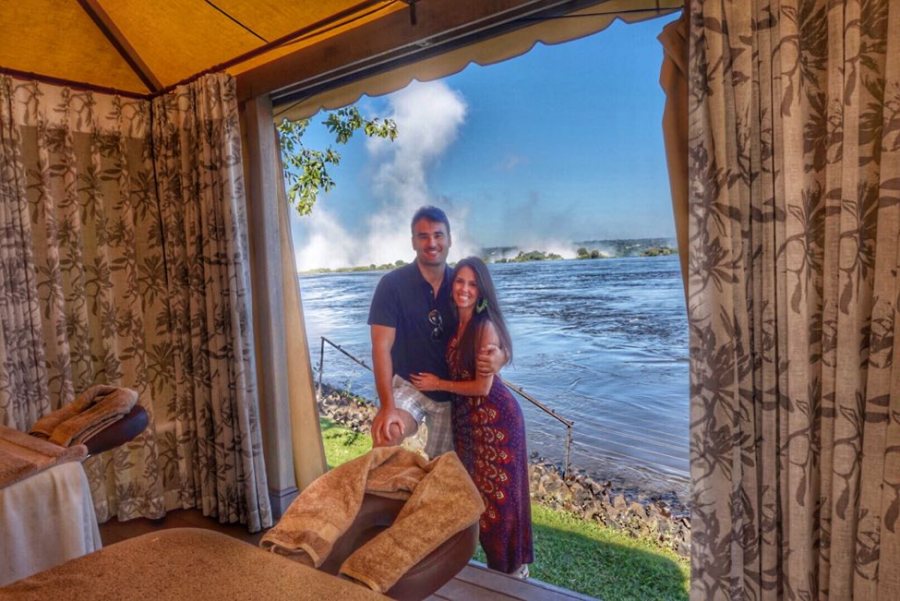 – The Spa with the Victoria Falls in the background –

The hotel’s spa is truly otherworldly, a paradise on earth. The spa’s reception is located next to the hotel lobby, but the massage itself takes place in the “cabins” that are located on the banks of the Zambezi River, from where you can also see the Victoria Falls.

The place was indescribable, I don’t think I’ve ever seen such an exclusive and unique environment that does such a great job of blending premium luxury with nature.

The massage was incredible and, to top it all off, two zebras appeared at the end of the massage who were eating grass at the edge of the river. 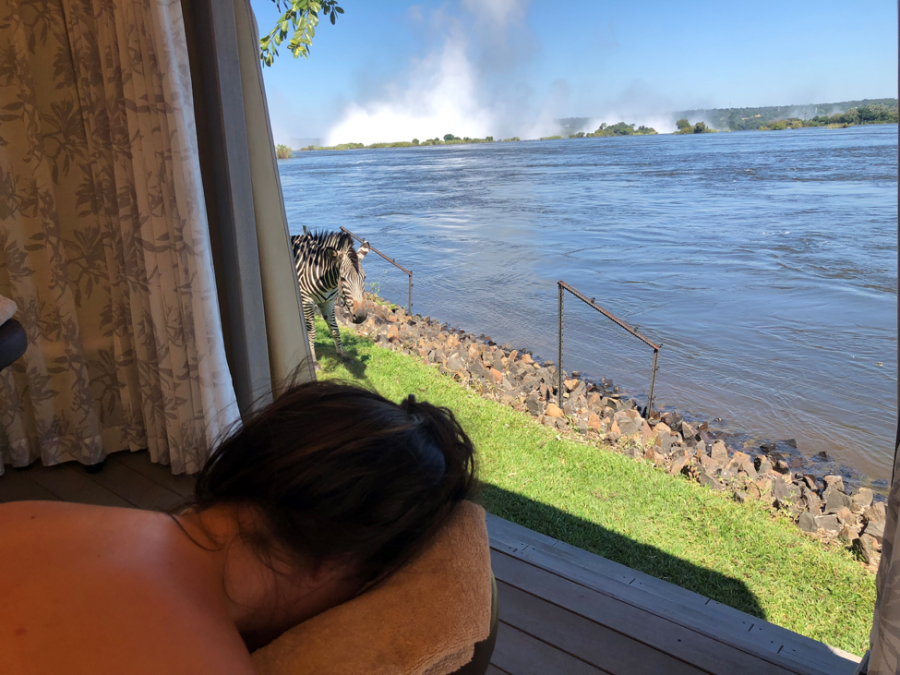 – The Spa wit our friends the zebras –

From there, we headed off on our first excursion. We were picked up by Peter from Bushtracks, who took us on a cultural excursion to a native village near the hotel.

This town is huge and has 8,000 inhabitants. We had the opportunity to learn how Mr Livingstone (Dr. Livingstone I suppose…) came to the town to talk with the King, and we learned about their culture and their way of life.

It was incredible to see how they live in community, so happy with so few resources. Before leaving, we went through the local market and tried to help as much as possible by buying a little something from each of the vendors. 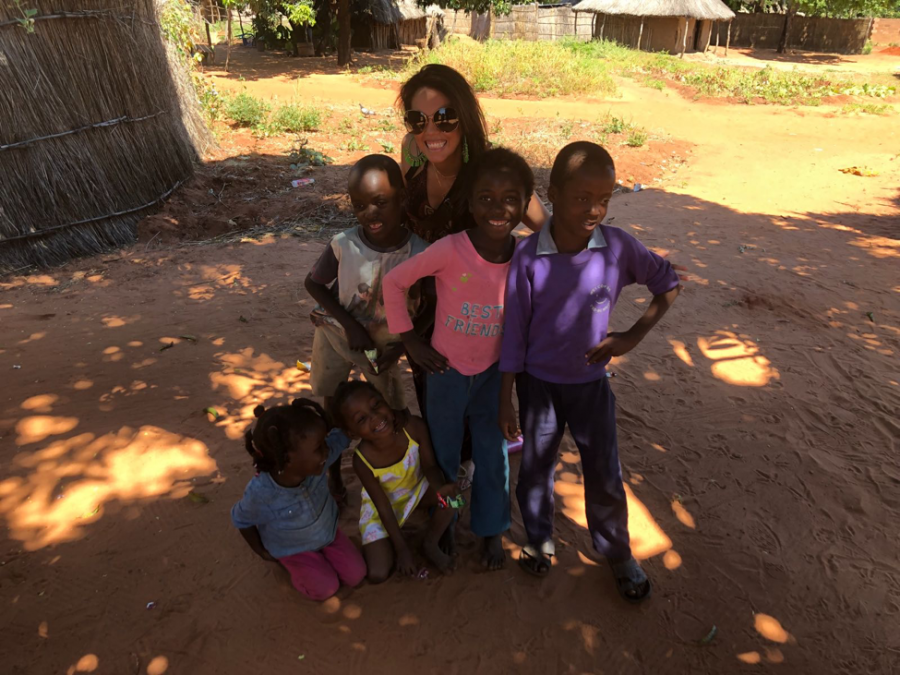 After this activity, we returned to the hotel to eat something before the next excursions. The hotel is located within the Mosi-oa-tunya National Park, which is home to the Victoria Falls.

These waterfalls are literally less than 5 minutes away from the AVANI Victoria Falls Resort Hotel, and you can easily walk there at any time, from 6 am to 6 pm.

We walked there and took pictures along the way of all the animals around us, zebras, giraffes, impalas…

When we arrived at the entrance to the falls, they recommended that we rent a raincoat because we were going to get very wet, and they were not exaggerating. 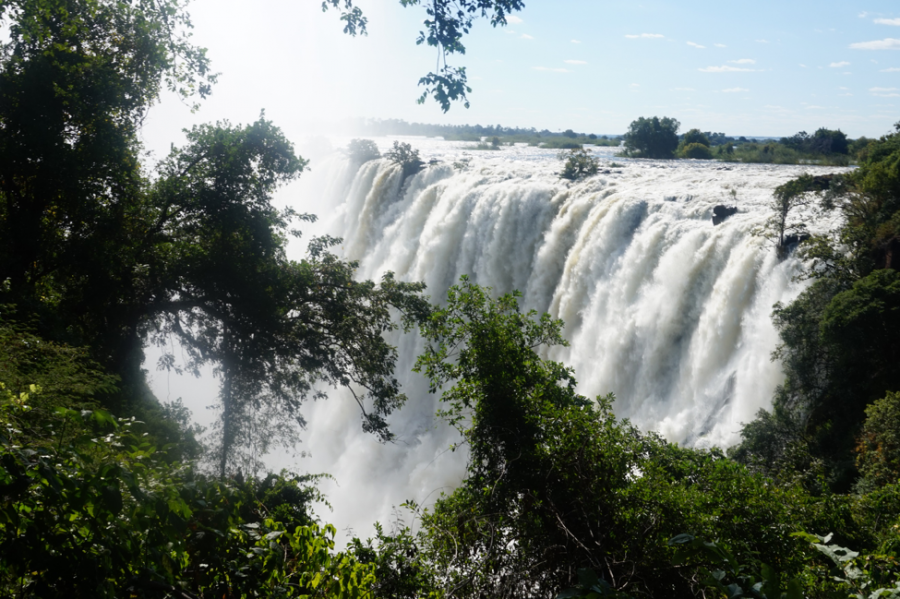 We rented raincoats and prepared to cross the bridge that is right in front of the falls. In less than 5 seconds, we were completely soaked from head to toe as if we had jumped into a pool.

It was a fantastic experience to see the Victoria Falls on one side and the vegetation and cracks in the rock on the other, while also admiring a beautiful rainbow on the left. I don’t think I’ve ever seen anything like it. 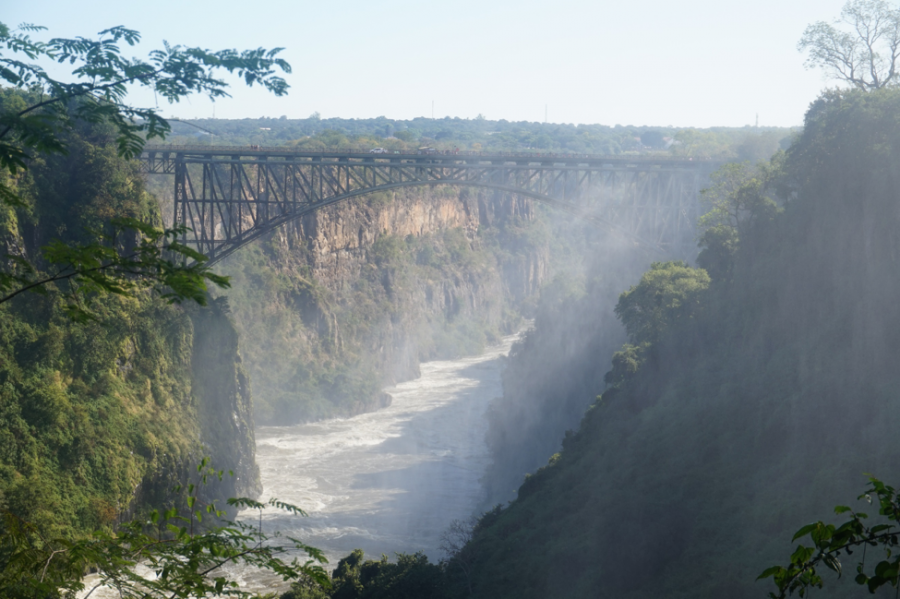 – The bridge connecting Zambia and Zimbabwe –

We quickly returned to the hotel because they were about to come and pick us up to take us to the sunset cruise. We spent approximately 4 hours on the cruise heading in the opposite direction of the Victoria Falls, on the Zambezi River.

We saw the most impressive sunset we had seen in a long time, a true African sunset. – The sunset at the Zambezi River –

Once the cruise was finished, we headed to the hotel since we were exhausted and arranged to order room service and go to sleep.

We spent two nights at the AVANI Victoria Falls Resort and another two at the Royal Livingstone Hotel by Anantara, which are sister-hotels, so we wanted to experience both. 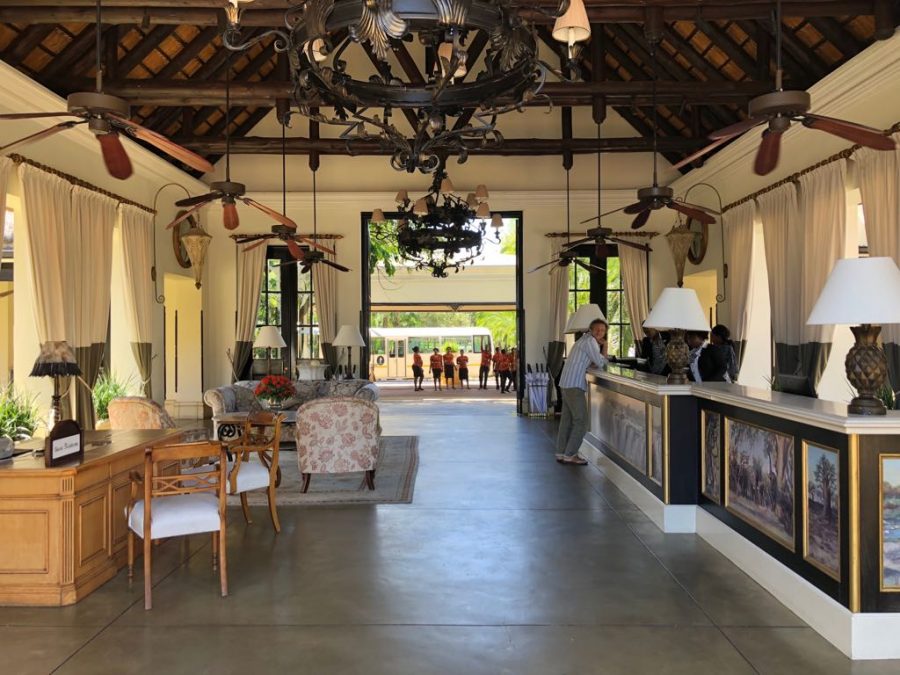 – The lobby at the Royal Livingstone Hotel – 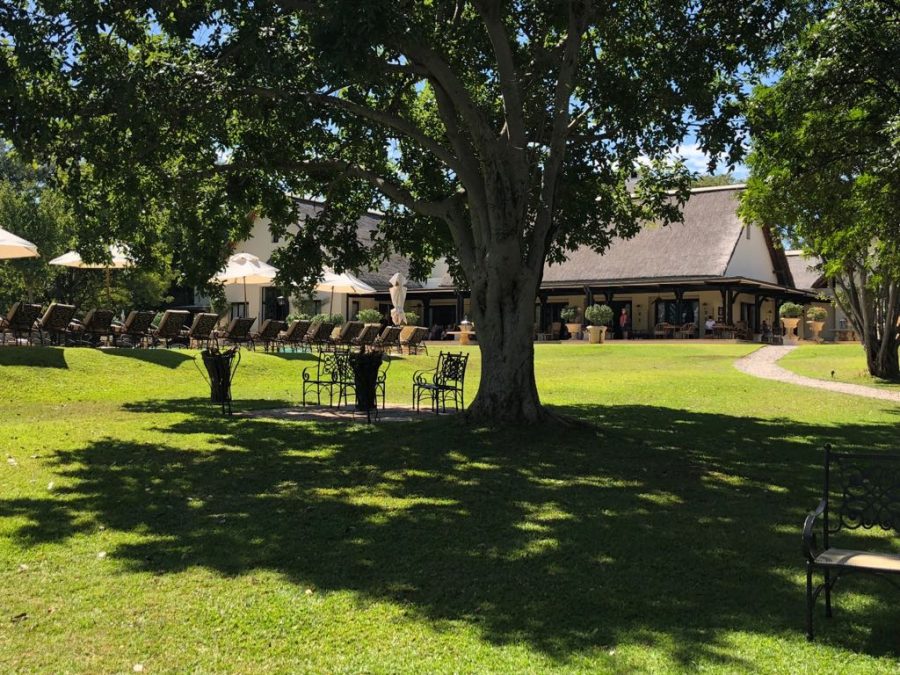 – The garden at the Royal Livingstone Hotel –

We had to get up early the next day. We were going to be picked up early in the morning to be taken on an outing on the Chobe River in Botswana.

The people from Bushtracks picked us up and took us to the border of Zambia and Botswana. On the border, we had to take a boat that took us across the river, after which we arrived in Botswana. We crossed the river that connects 4 countries: Zambia, Zimbabwe, Namibia and Botswana.

The outing consisted of two parts, one by boat across the Chobe River and the other in a 4×4 car that also crossed the river. In the morning, we did the boat tour and saw all kinds of wild animals such as hippos, buffalos, crocodiles, elephants, impalas, baboons, etc.

It was absolutely amazing and we had never seen anything like it. A true wonder of nature. 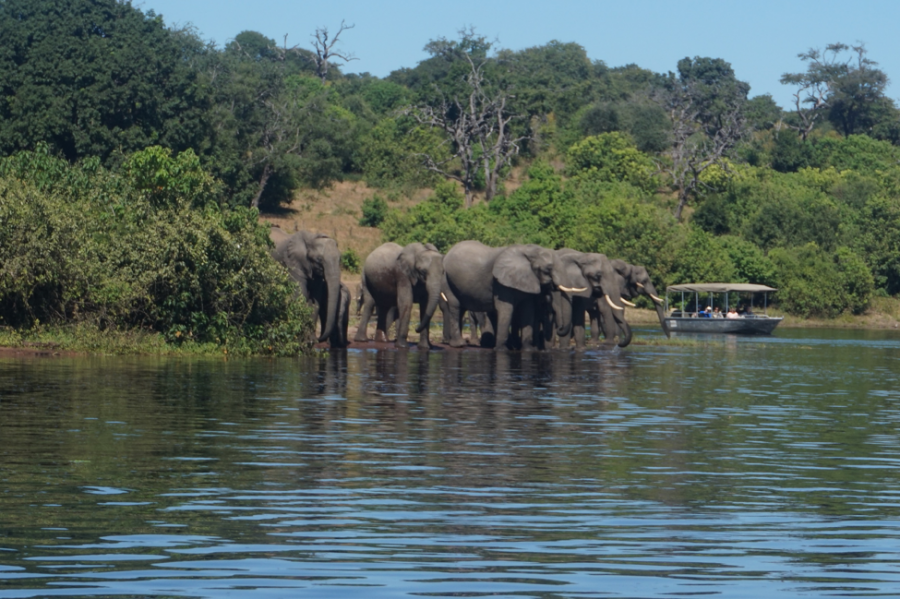 – Elephants by the Chobe River –

After, to take a break, we headed to a small hotel where we were given a quick buffet lunch. Immediately after, we did the part in the 4×4 car, where we got to see elephants, giraffes, buffalos and two lions (male and female), which were about to attack their prey. 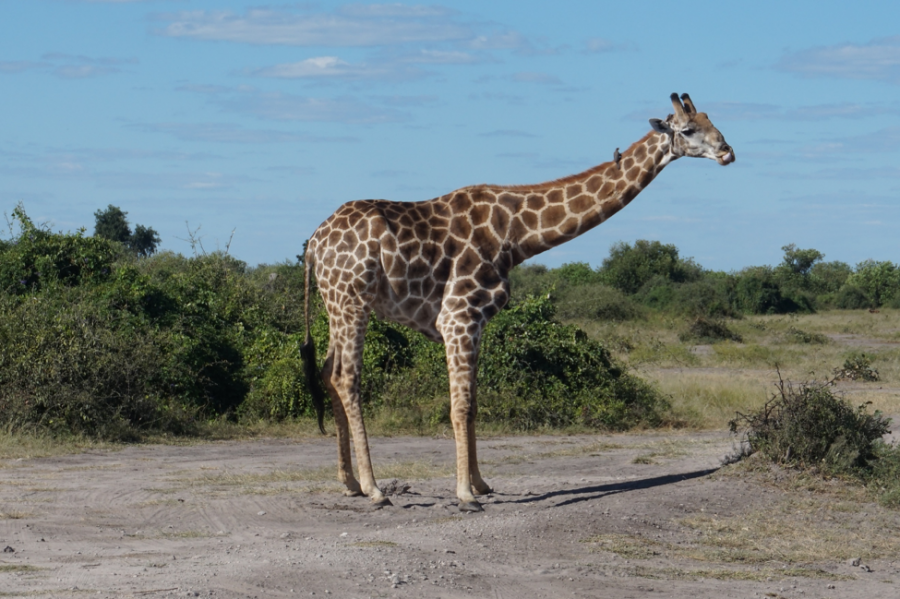 – A giraffe in the middle of nowhere –

It was honestly one of the most incredible experiences of our lives although somewhat scary because the car wasn’t closed off. When the tour ended, we went back to the hotel to rest, took a shower and then went to dinner at the hotel restaurant.

The food was amazing and the service was even better. 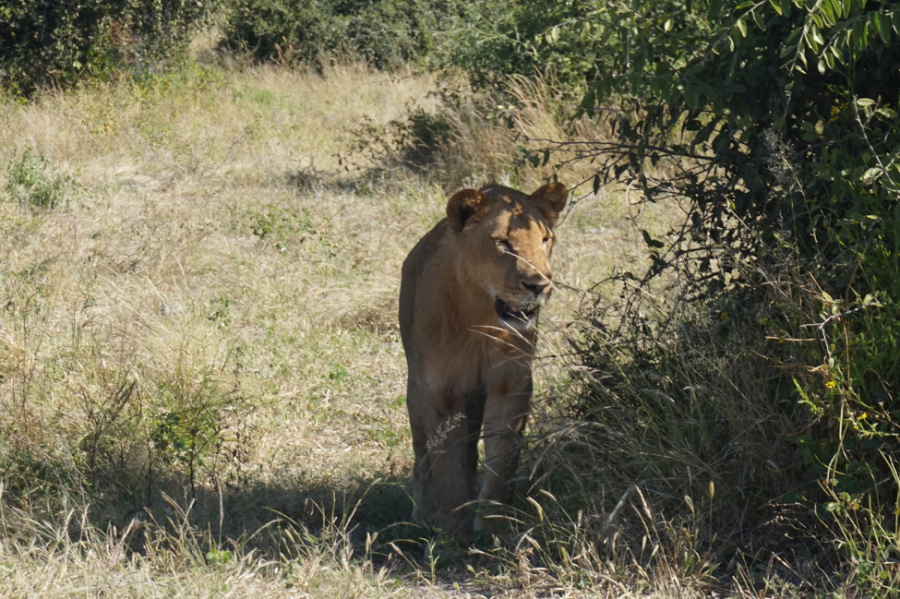 Our room at the Royal Livingstone Hotel by Anantara was absolutely amazing with a great colonial atmosphere and, of course, it had a small terrace overlooking the garden, where you could see the Zambezi River and animals such as zebras and impalas running around.

The place was truly magical. 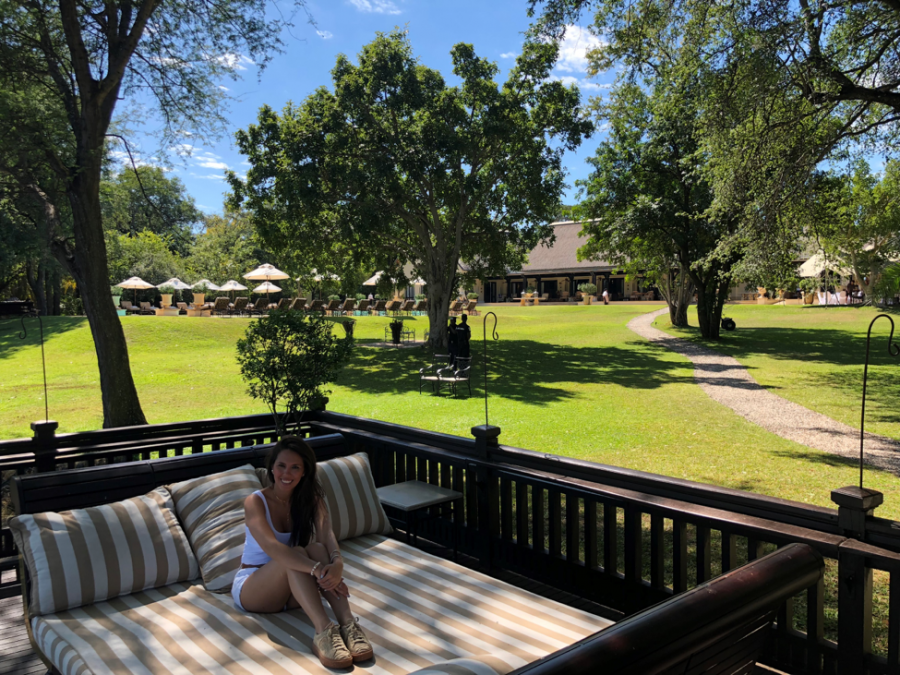 – Relaxing by the river near the sundeck – – Making friends with the zebras –

The attention to detail at this hotel is impressive. When we entered the room, we had a tray full of chocolate cookies that looked homemade and were unbelievably good.

We also had a small personalised note where they welcomed us and thanked us for staying at the hotel. 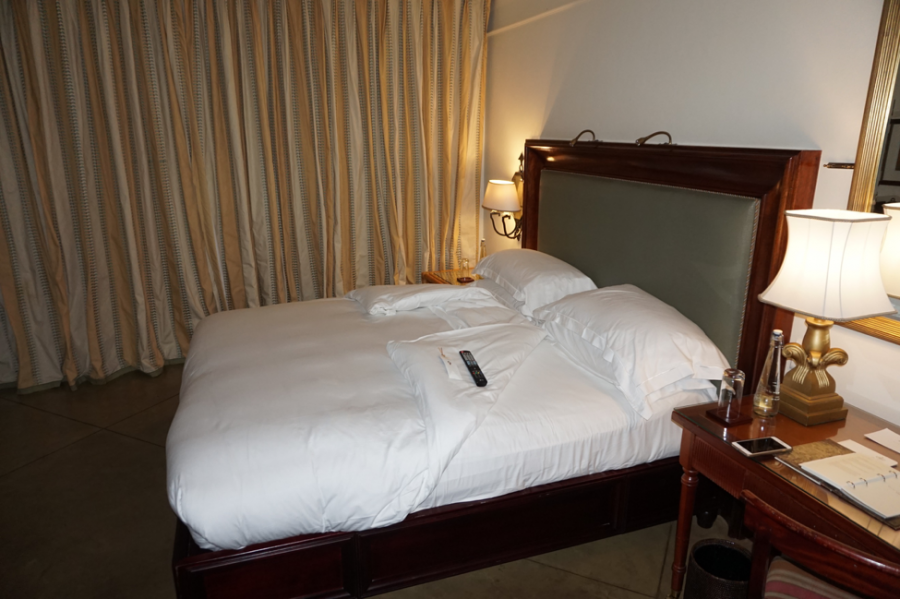 – Our terrace overlooking the Zambezi River –

This hotel is truly amazing. The fact that it is in a National Park means that you can see all kinds of animals, such as zebras, baboons, impalas and even giraffes… there’s almost no need to go on a safari.

Besides the animals that are permanently roaming around the hotel, there are some other really incredible things about this hotel that we can’t forget to mention.

The part that most impressed us was the sundeck that is literally located on the banks of the Zambezi River. 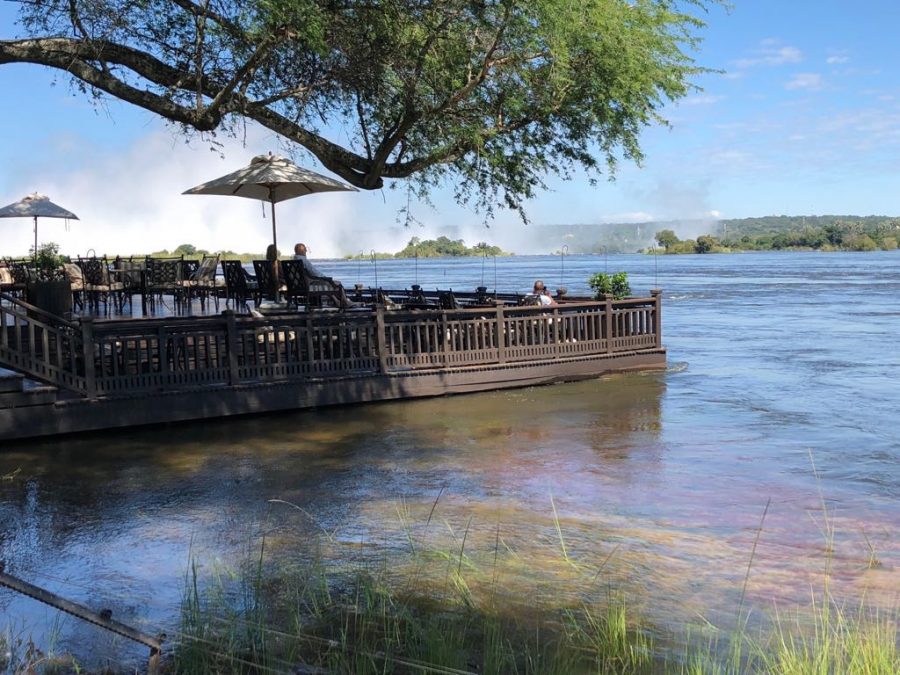 Every afternoon, it is full of people having a tea or coffee, admiring the wonder of nature that is being able to watch the Zambezi River gently flowing towards the Victoria Falls. 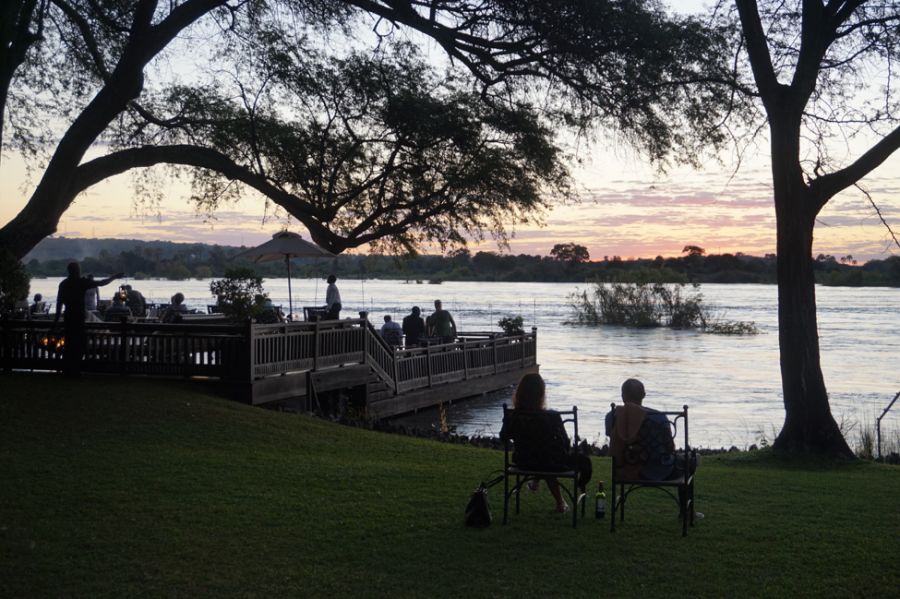 The sound of the water is really relaxing and you never get tired of looking at the surroundings… the river, trees, animals, birds, the sounds of the jungle, the sound of the falls in the background, it makes you understand that nature is where the human being really belongs.

The next day in the morning, we went out on our last excursion.

It was a microlight flight over the Victoria Falls. They picked us up at the hotel and, in less than 15 minutes, we were on the runway. 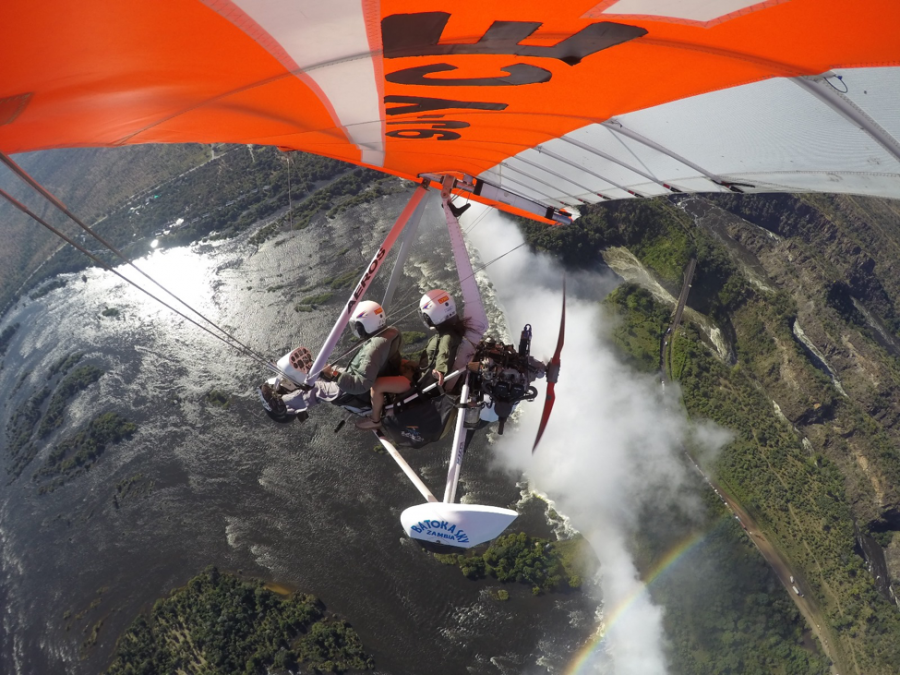 – Flying over the Victoria Falls –

The flight can only take one person in addition to the pilot, so we had no choice but to do it in turns. There were several pilots so it went by pretty fast.

On the way back, we were able to check out several places where the hippos hide when the waters flood and it was truly a spectacular sight. This flight is not for the faint of heart.

When we were done, we were taken back to the hotel and we got to enjoy the pool and had another massage at the spa. 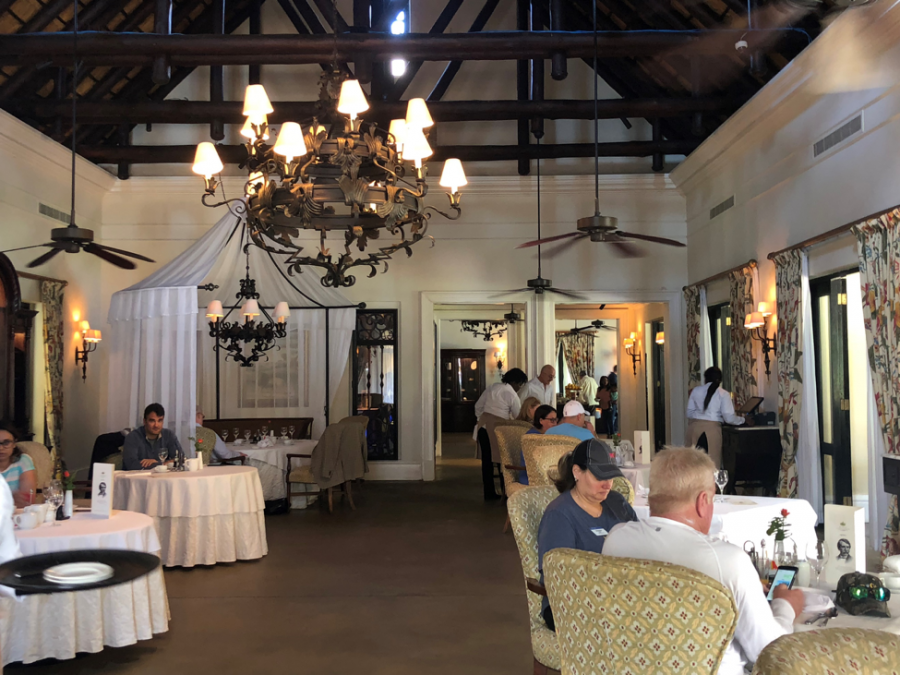 It’s the hotel that’s impressed me the most out of all my travels in Southern Africa. Thank you to Joyce and the entire Anantara Team for making this experience unforgettable.