We arrived at the Hamad International Airport on May 1st, 2016 after a 14-hour long trip from Miami. An elegant representative of the Mövenpick Hotel West Bay Doha was waiting for us there with a sign reading our name. Immediately, he took us to the limo and from there we left for the hotel.

The driver was very nice and explained he was from Macedonia (thank God we knew its capital – Skopje 🙂 ) and during the trip he explained what life is like in Doha and what some of the impressive buildings we could see on both sides of us represented. I have to mention that the hotel’s car had Wi-Fi via a device provided by the hotel!!!! This was a huge bonus for us because after a 14-hour long trip, emails and WhatsApp messages pile up.

When we reached the hotel it was nighttime and we could see the lit up building from the outside. It was a very tall building made of glass with very modern architecture overlooking the sea… pretty awesome!

When we entered the lobby a lovely woman named Panda received us, who was, in fact, from “Macedonia”. There she did our check-in quickly and gave us an upgrade to a room on the 18th floor with a sea view. We exchanged 40 dollars to local currency just in case, until we could get to a local bank. Before heading off to our room we were received by the very friendly Saied, the on duty manager, who asked if he could do anything for us.

We arrived at our room and… WOW. The room was as big as an apartment!! The first thing we saw was a huge room with large windows overlooking the sea, with a kitchen, sofas for resting and a work area with its own desk and everything a “business executive” could need. Further on there was the bedroom and bathroom, all designed with exquisite and modern taste. The kitchen had something that fascinated me as a coffee and tea enthusiast – a Nespresso with all different types of capsules and an incredible variety of different teas. We made good use of it during our stay in the hotel.

But the best of all and the most special detail were the two bags on top of a table that said “Adventure Survival Kit While In Doha”. They were two bags with sunscreen, water, an apple, chocolate, a map and some other things that I can’t remember. We found this to be a really special touch and something that we had never seen before. And of course, the Wi-Fi was free throughout the hotel and was very fast! 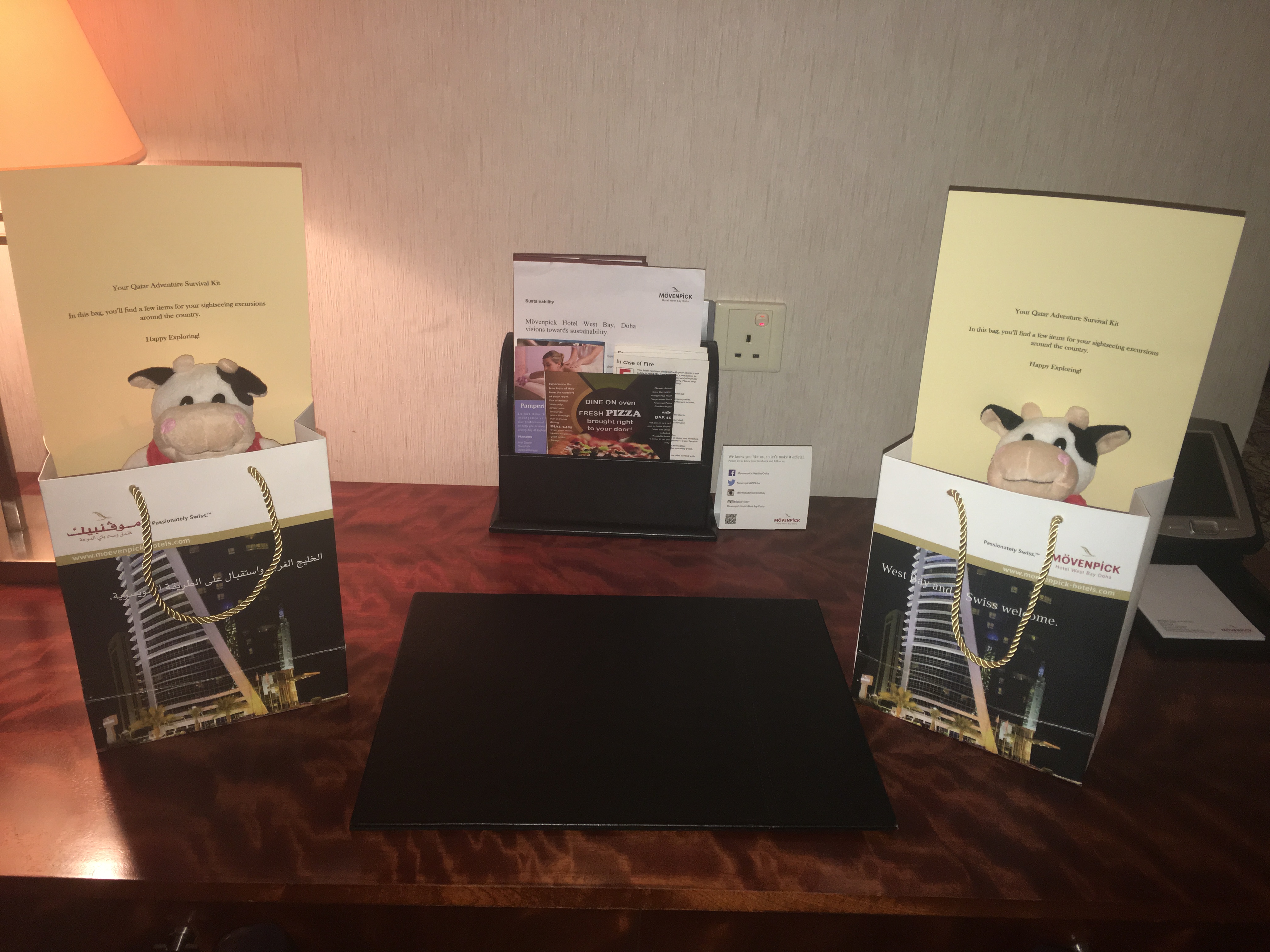 – Adventure Survival Kit while in Doha –

The first thing we did after unpacking our suitcases was head to the Forknife restaurant for dinner. There, they had a very large buffet with all types of international food including Western, Oriental and, of course, Middle Eastern food. Everything was fabulous in an inviting atmosphere.

After, we went to the Spa and treated ourselves to a massage. It was very convenient as it closed at 10:00 pm, pretty late for being a Spa. While we waited for our therapists, we checked out the gym and went to the hotel’s indoor pool. The pool was incredible! It was very big for being indoors and being illuminated at night made us feel like we were in the tale of “One Thousand And One Nights”… a real treat!

We returned to the Spa where our therapists from Thailand and the Philippines were ready to resuscitate our bruised bodies back to life. Ah… yes, boys with boys and girls with girls, as is customary in the country. Our massages were magnificent and we felt like we were flying! Finally, we drank our mint tea and went to sleep.

The following morning, we woke up at 5:00 am (a little jet-lagged) and we waited until breakfast opened and went down like thunderbolts to the first floor where they serve breakfast. I have to say that the breakfast was to die for! The buffet had everything from the typical English breakfast to Asian dumplings, and we didn’t know where to start. We focused on the fresh fruit, juices, fried eggs and the turkey bacon (forget about pork). They had a huge bar where they made omelets or fried eggs to your liking and a type of “English Bread” that I dared to try and went crazy for… although it didn’t seem like it was going to help with my diet.

After breakfast we went down to the lobby and hired a car from the hotel to take us on a “boot camp” tour around Doha. The truth is that it was the best we could have done since the car was impeccable, with a lovely driver and at a very reasonable price of 25 USD per hour. And of course it had Wi-Fi, and each time we left the car the driver lent us the device so that we could call whoever we wanted via Skype or WhatsApp. What a luxury!!

For four days, with our car from the hotel, we continued our adventures to the Souq Waqif, museums, mosques, shopping centers and the desert, and at the end of the day we came back delighted to our own desert oasis.

The most impressive part of our excursions was the desert and we hired it through the hotel concierge. It was one of the most unique and exciting excursions of our lives. It cost us just under 100 USD per person and we had our own chauffeur who took us around the dunes south of Qatar to the border with Saudi Arabia and, of course, we rode camels and drank tea, which could not be missed.

For several days we sat in the hotel’s restaurant/bar (Lime Tree) to have a tea or a sandwich, or just to get some work done on our laptops. The atmosphere was nice and there was an impressive selection of pastries and cakes! We also ate once at the hotel’s Lebanese restaurant. That day it was a little early and there weren’t too many people so we were treated very well and the food was great. We love Lebanese food.

The last day, our flight was very late at night and they were kind enough to give us a late check-out, which honestly saved our lives, being able to rest a bit before starting off on our next trip to the Maldives. Around 9:00 pm, the same car from the hotel waited for us to take us to the airport, but first we had to say goodbye to Saied, an endearing person who radiated kindness and positive vibrations.

The conclusion is that the Mövenpick Hotel West Bay is an ideal hotel for business travelers and tourists alike. It’s located in the heart of the capital of Qatar and offers impeccable quality and services. If we had to go back, we wouldn’t think twice about staying at this 5 star Hotel in Doha again.

They made us feel really special!