We left the Poroy (Cusco) train station and after about 3 hours and 30 minutes of a spectacular journey through the mountains, we arrived at Aguas Calientes, a charming village that serves as the home base for tourists going to Machu Picchu.

Just before arriving at the Aguas Calientes station, and while the train was slowing down, we looked around and saw a lush jungle with some houses scattered among the weeds and river, and thought, “Wow, these houses are amazing, it would be great to stay there!!!”. A minute later, we arrived at the train station and we collected our bags. 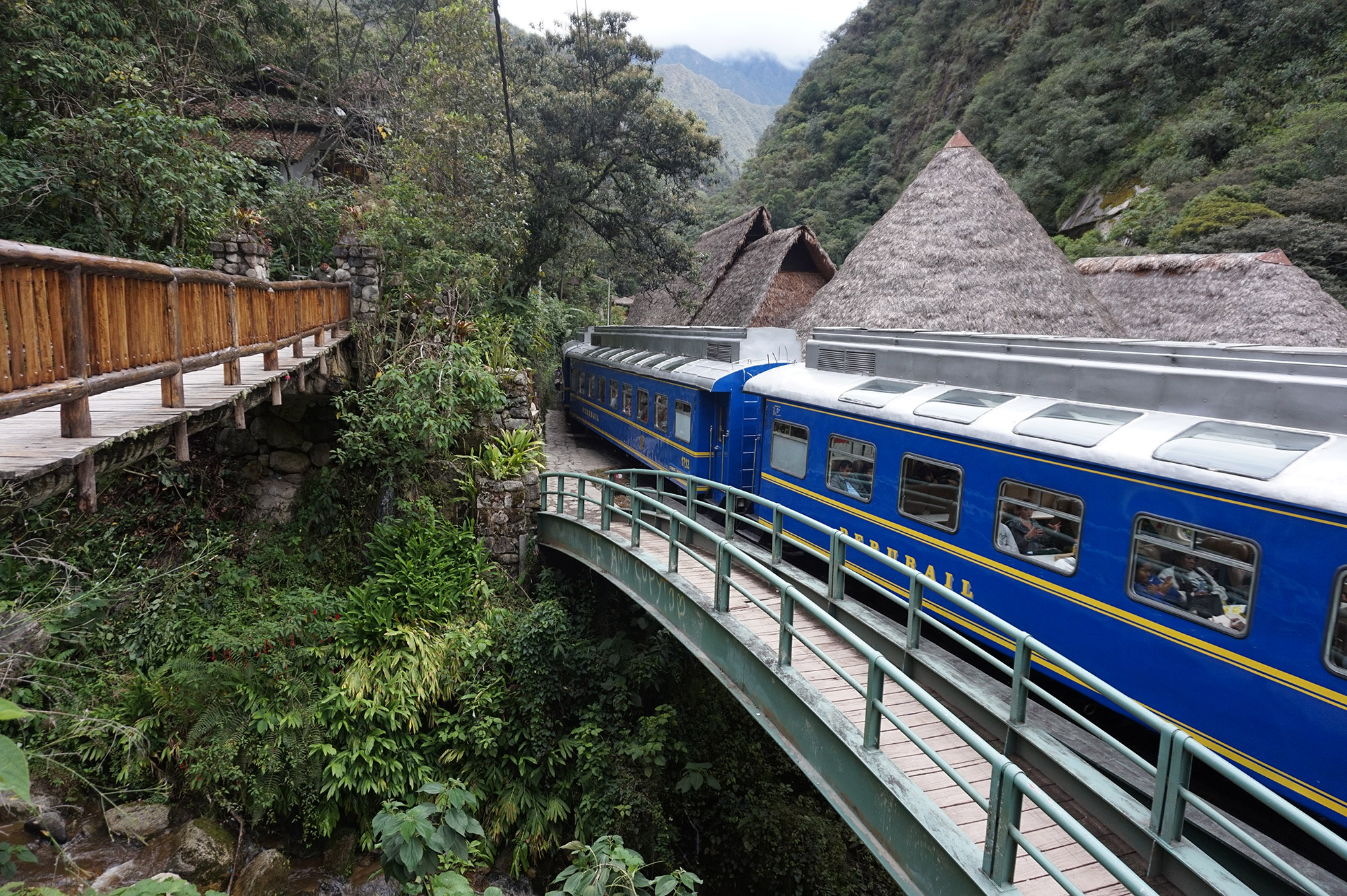 – Arrival at the Station (Hotel Left and Right) –

Outside the station there were two people from INKATERRA MACHU PICCHU PUEBLO HOTEL waiting to pick up our bags and take them directly to the hotel. A person left with our suitcases and another escorted us to the lobby that was literally less than a 5-minute walk from the station.

Upon arrival at the hotel lobby, we realized that the little houses in the jungle we had seen from the train really belonged to the Inkaterra Machu Picchu Pueblo Hotel and we became tremendously happy. The hotel is an intimate Andean village with terraces, streams, stone paths and 81 adobe houses in the woods.

The enclosure has five hectares of exquisite natural beauty, where 214 species of birds have been registered, -such as the golden-headed quetzal and the iconic cock-of-the-rock-, as well as the world’s largest collection of native orchids, with 372 species.

Our first stop was the lobby. There we waited about 30 minutes until our room was ready. We were happy to wait as the lobby had several areas with sofas, various burning fireplaces, and a top-notch WIFI connection. In addition, we were offered a hot sweet tea that made the experience very enjoyable. 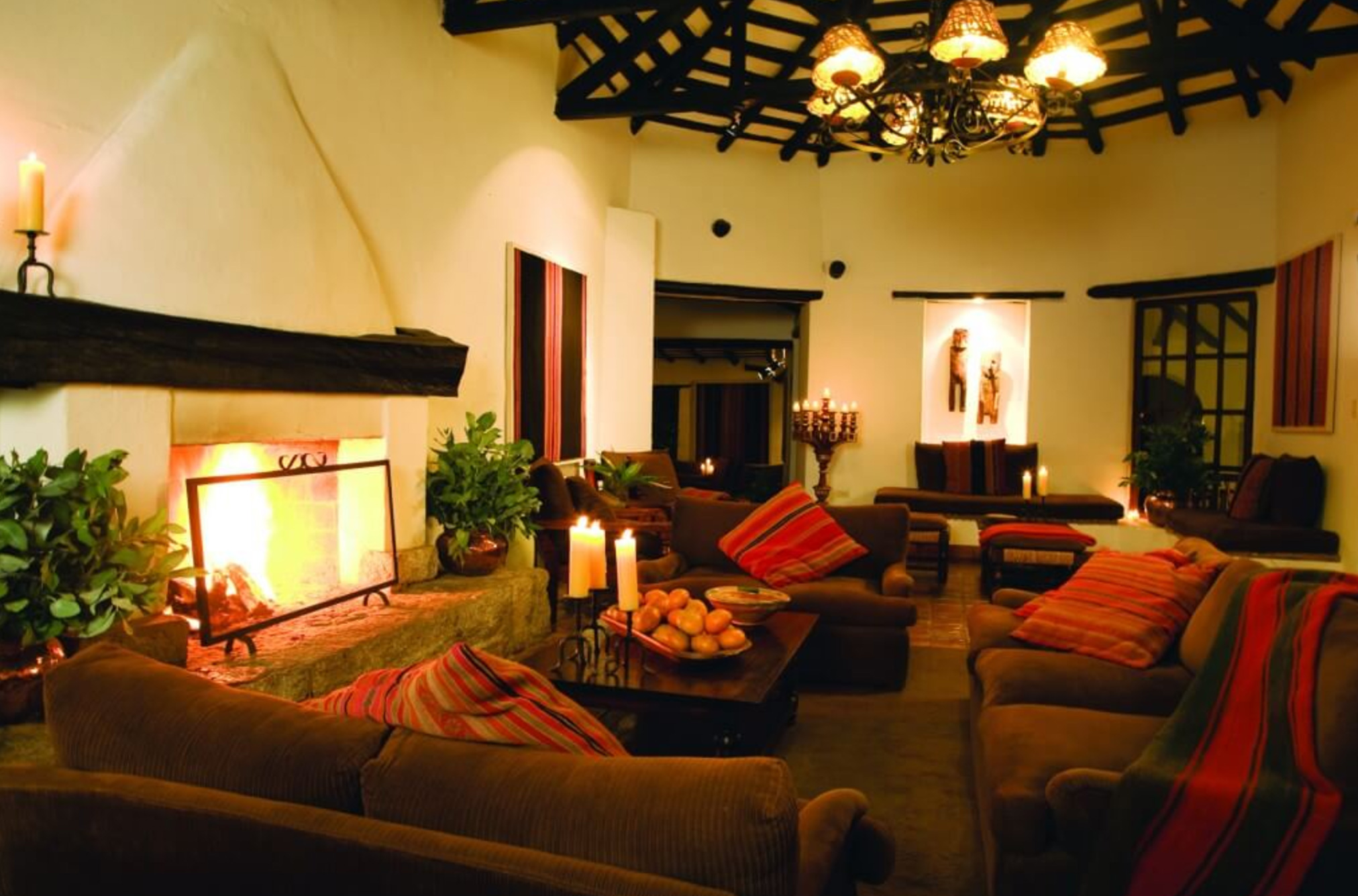 From there, and after having been given an upgrade on our room, we headed to our villa, which was number 43. From the villa we could see the forest and the river. It was very spacious and had a fireplace, living room, two huge beds and a bathroom with an array of details. I was pleasantly surprised by the water pressure, which for me is a crucial factor.

We immediately changed clothes and headed to the tourist attraction par excellence. We found that we had to buy entrance tickets in one place and the train tickets elsewhere. We hurried to do everything as quickly as possible and head towards the top of the mountain to the sacred and energetic place called Machu Picchu.

The road gave both of us the willies because, as we were going up, it became more and more steep and we were terrified to look down. We could not believe that every day hundreds of buses go up and down that road and nothing has ever happened. 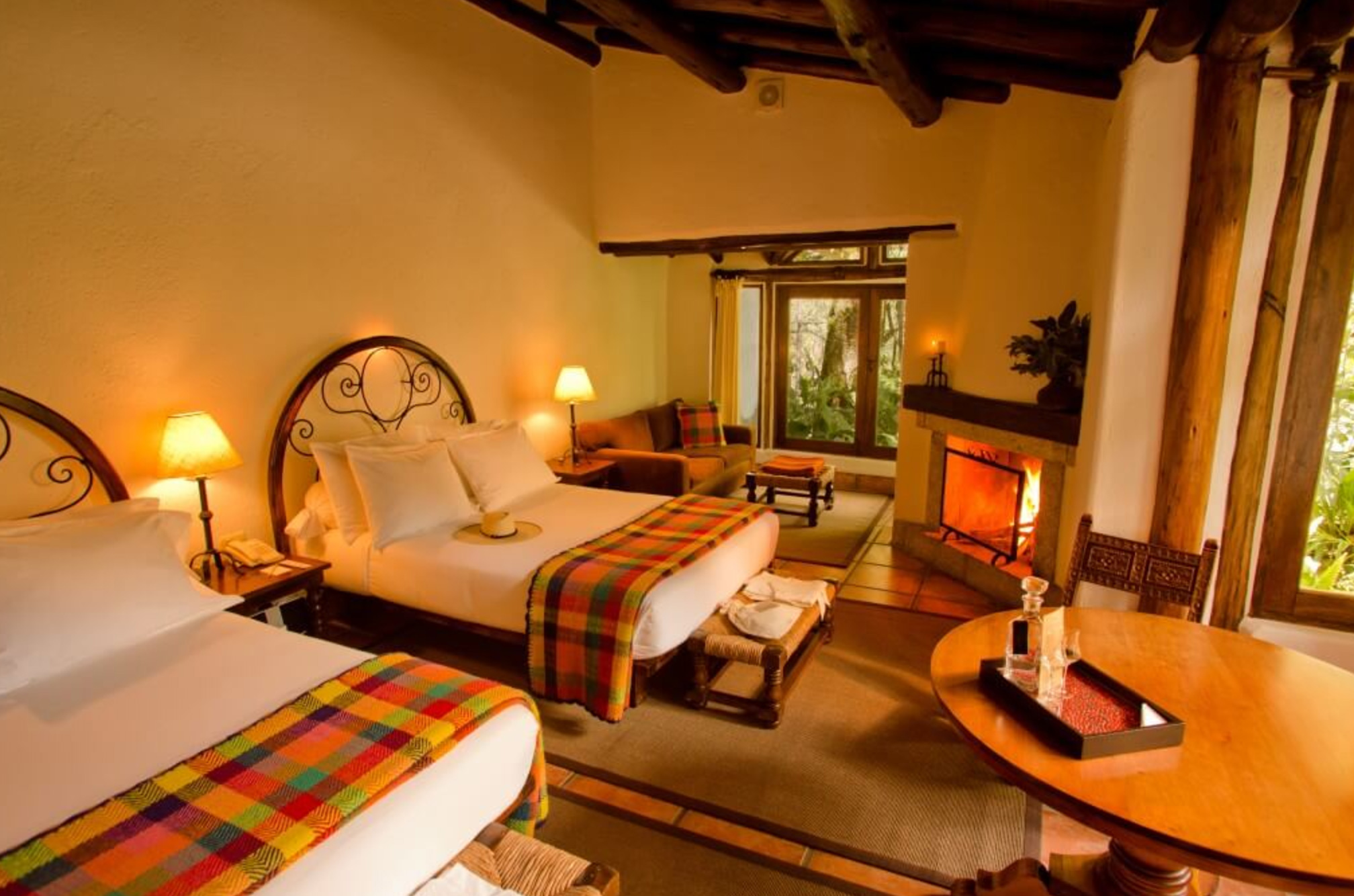 Right when we got off the bus, a group of guides offered us their services and without thinking twice, we hired the first that spoke to us (120 soles for a couple hours with a private guided service). The price was a bargain, as exploring Machu Picchu without a guide is a mistake that no one should make. 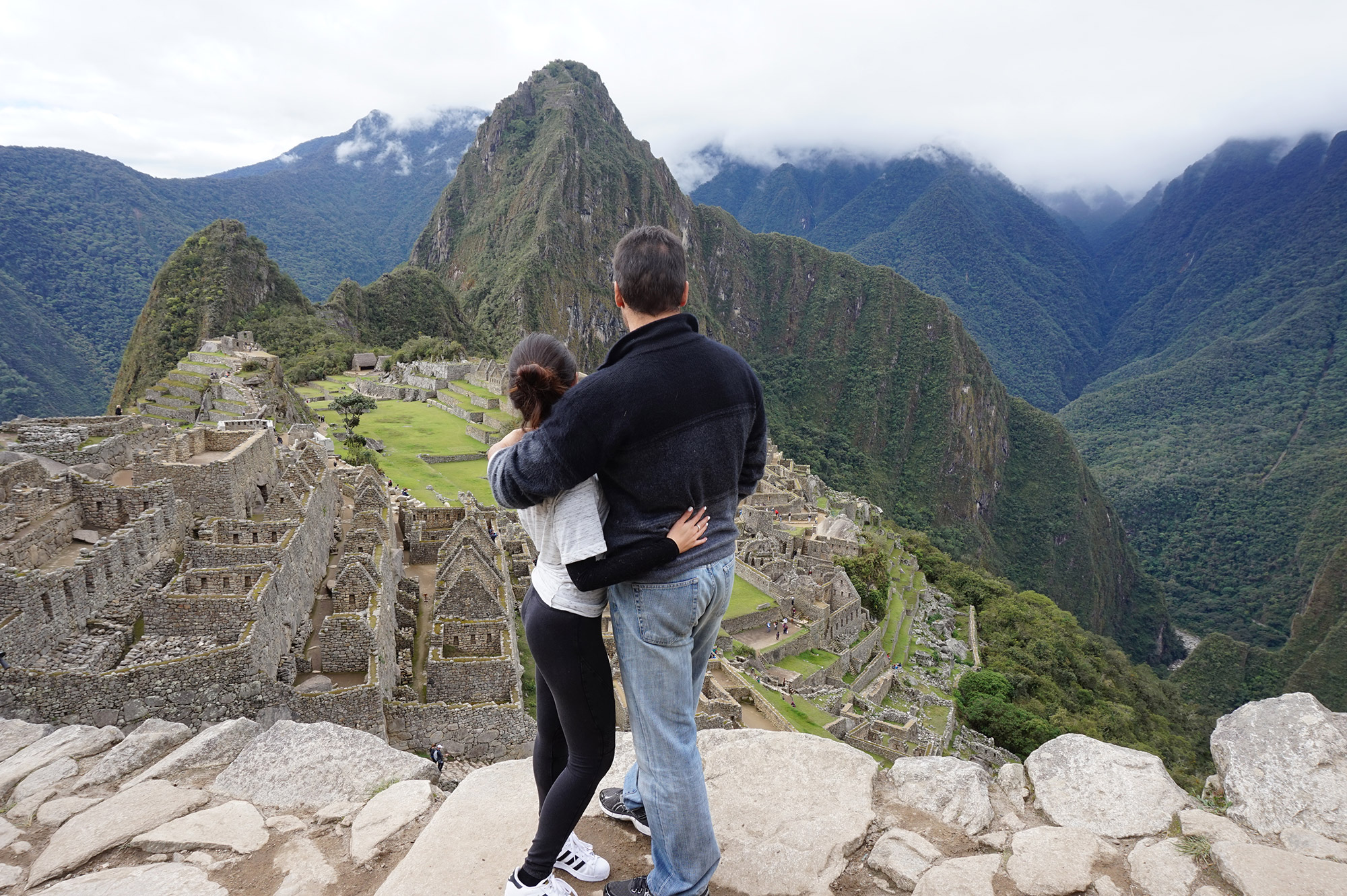 After the tour ended, we returned to the hotel a little tired, we got ready and went directly to get a massage at the Spa. The Spa is beautiful, very special and is surrounded by a large outdoor Jacuzzi and a lagoon with natural water coming down from the mountain.

We were surprised by the Spa’s straw floor, which was a special touch since we have been in dozens of Spas around the world and had never seen anything like it.

Our plan included half board, i.e. breakfast and dinner, and so we headed to the restaurant located at the center of the hotel, full of windows through which you could look over the forest and the river. The food was excellent!

For dinner we had a vegetable soup followed by lamb, all high quality. For dessert, a chocolate treat whose name I can’t remember. We went to bed straight after dinner, we were exhausted after waking up at 5:00 am.

The next morning, we woke up very early, got dressed, packed our bags and went to breakfast at the same restaurant we were at for dinner. With daylight we could appreciate even more how wonderful the hotel’s location is in the middle of the jungle!

After breakfast, and before our train left, we went to the jungle with the orchids. This is a route that is normally done with a guide, but it was too early and there was no time, so we walked through it quickly and saw the different types of orchids and all kinds of plants we’d never seen.

On the sides of the mountains there were several natural waterfalls down to the river. In addition, we found an organic garden, where the hotel grew their own herbs and organic spices! It was wonderful… nature in its purest state. 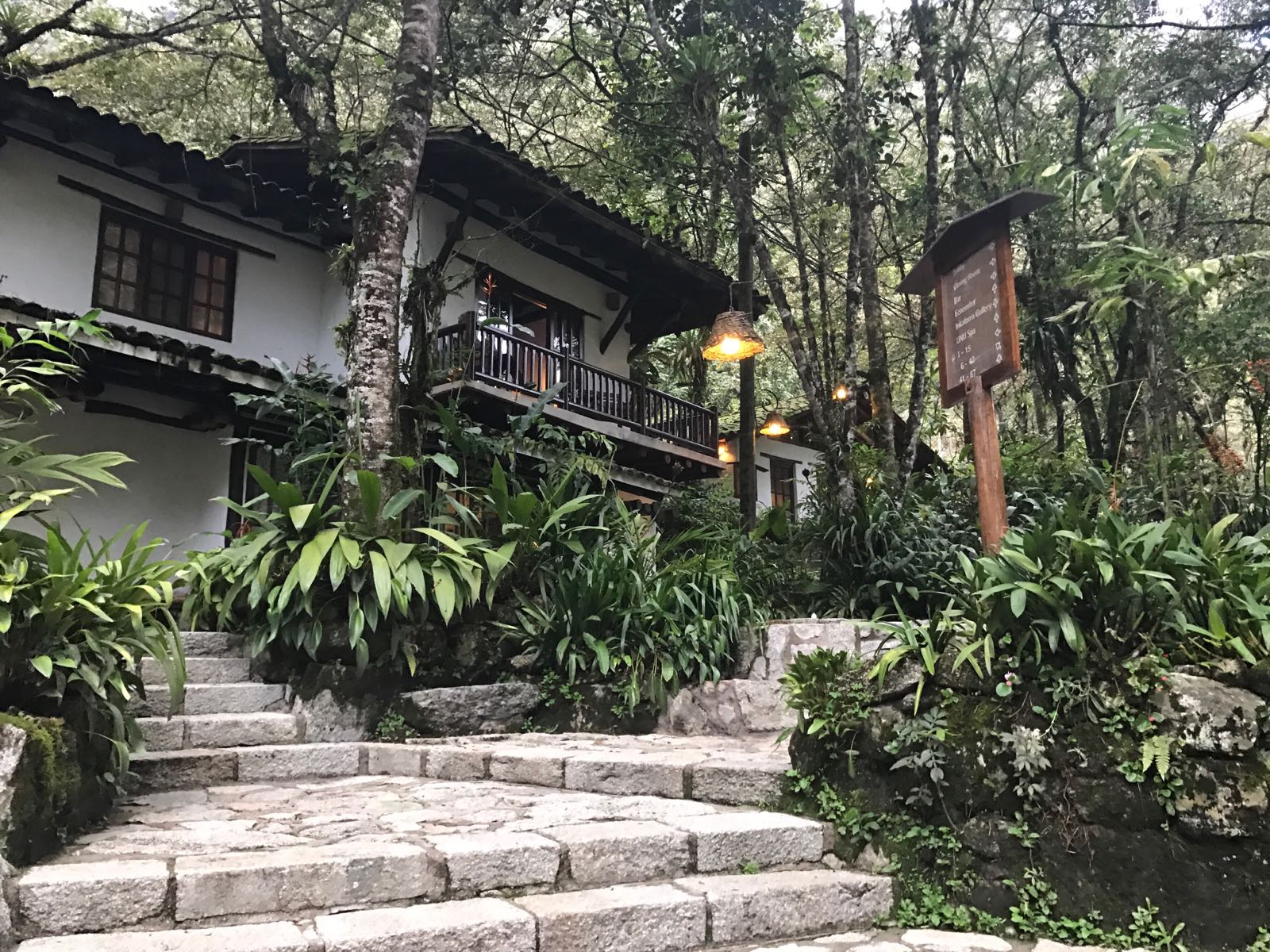 We had to rush to the station but of course we would have wanted to stay longer. The trip to the station was fast. The hotel staff, always helpful and exquisite, took our bags directly to the station and said goodbye to us.

In short, the Inkaterra Machu Picchu Pueblo Hotel is a 5-star hotel at the highest level in the middle of the Andean jungle with all the luxuries one would expect. It is the perfect stop for any tourist who is on their way to Machu Picchu.