Right after we reached the airport, we took a taxi that cost us 7 dollars and in just 10 minutes we had arrived at the Hotel del Parque.

For starters, we chose Guayaquil instead of Quito for our stopover to the Galapagos Islands because Quito is pretty high up (2,850 meres) and Guayaquil is basically at sea level.

Altitude has a really negative effect on us because it causes headaches, difficulties in breathing and overall discomfort, hence we chose Guayaquil.

Secondly, we chose Hotel del Parque not only because it’s next to the airport, but also because it’s without a doubt the best hotel in Guayaquil.

The Hotel del Parque is located on the banks of the Daule River and, as its name suggests, it’s within a wonderful park where there are more than 50 species of birds, mammals and other animals.

Many species live among the gardens, with birds such as parrots, eagles, toucans and diving ducks; mammals like sloths (difficult to see), northern tiger cats, deer, spider monkeys, tapirs and collared peccaries; and reptiles such as crocodiles and alligators.

This means that as soon as you enter the grounds, you feel like you’ve gone straight into the jungle.

Upon entering the hotel, we completed the check-in within a majestic lobby decorated with exquisite taste.

I had to ask who had decorated it, and they told me that it was an Ecuadorian decorator who had collected the furniture himself in Ecuador, except for the large central mirror that is an original Italian piece that had been restored. 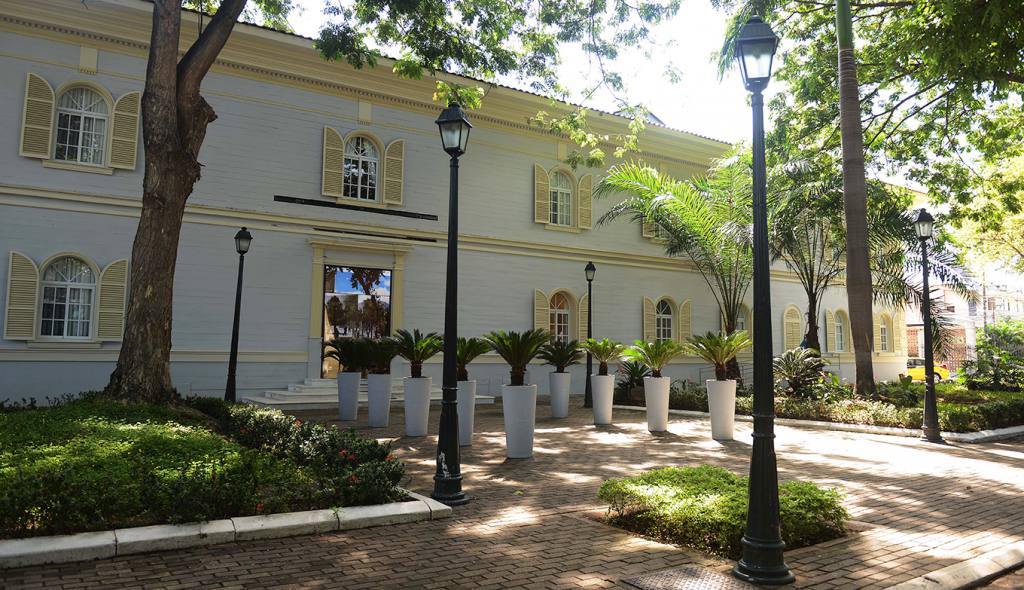 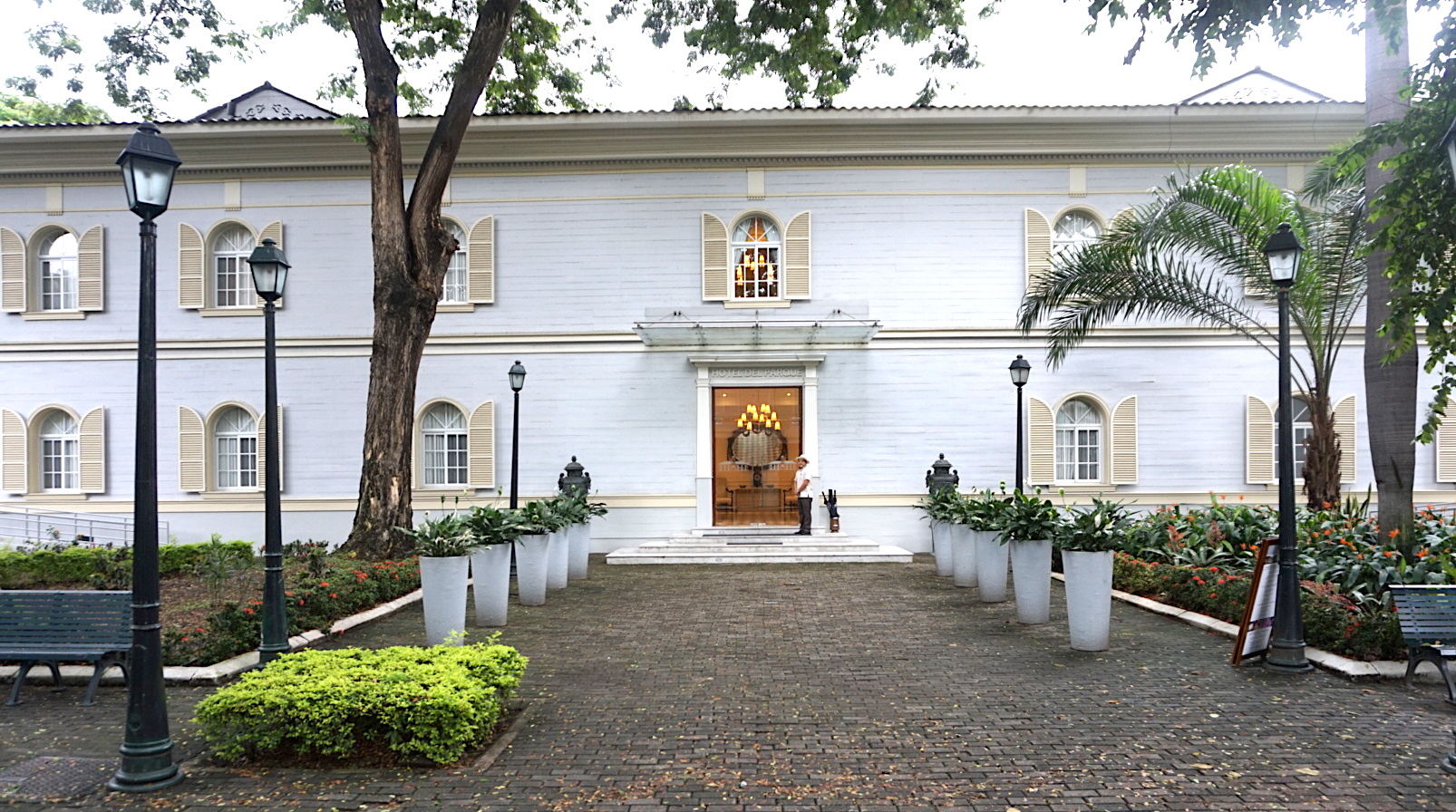 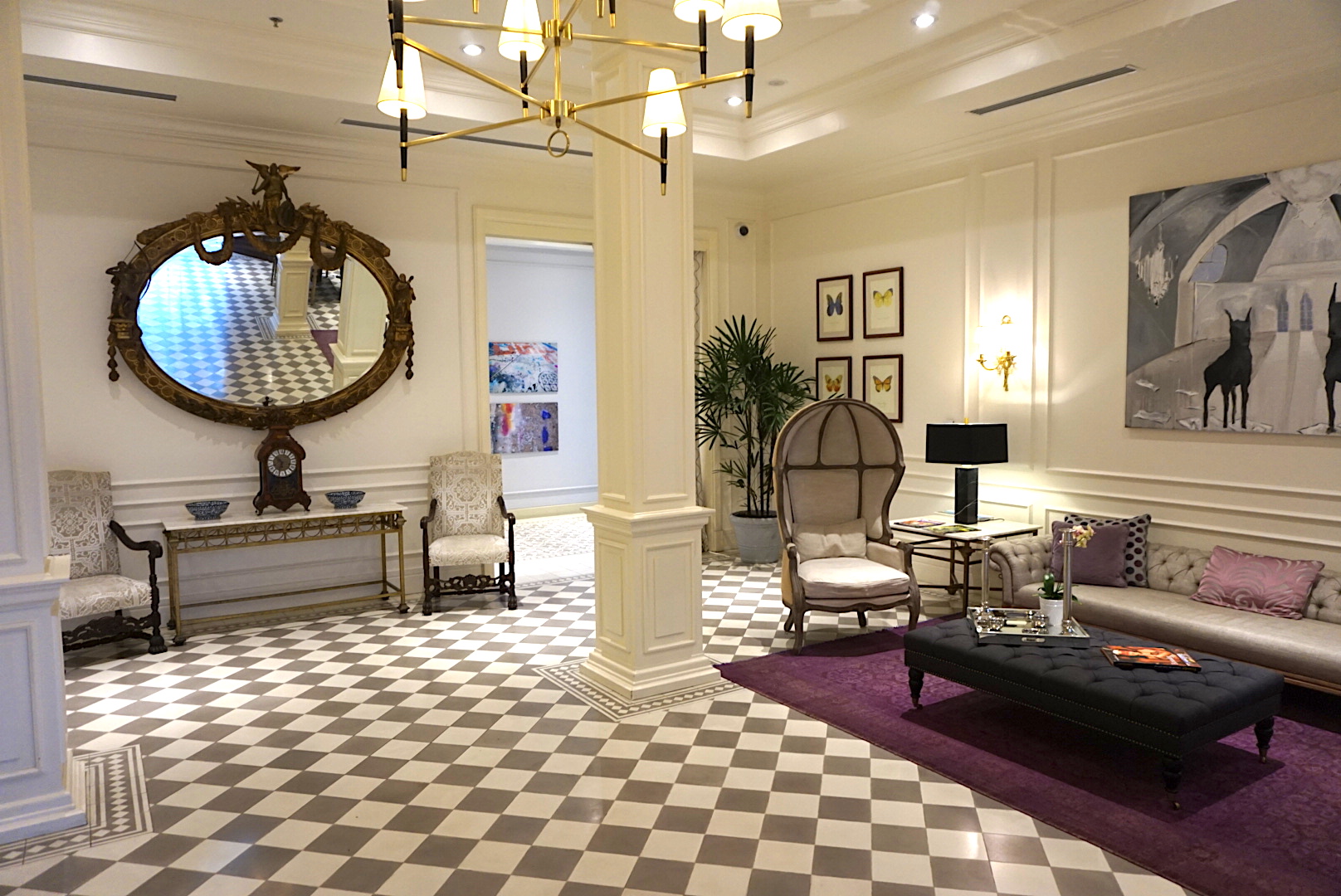 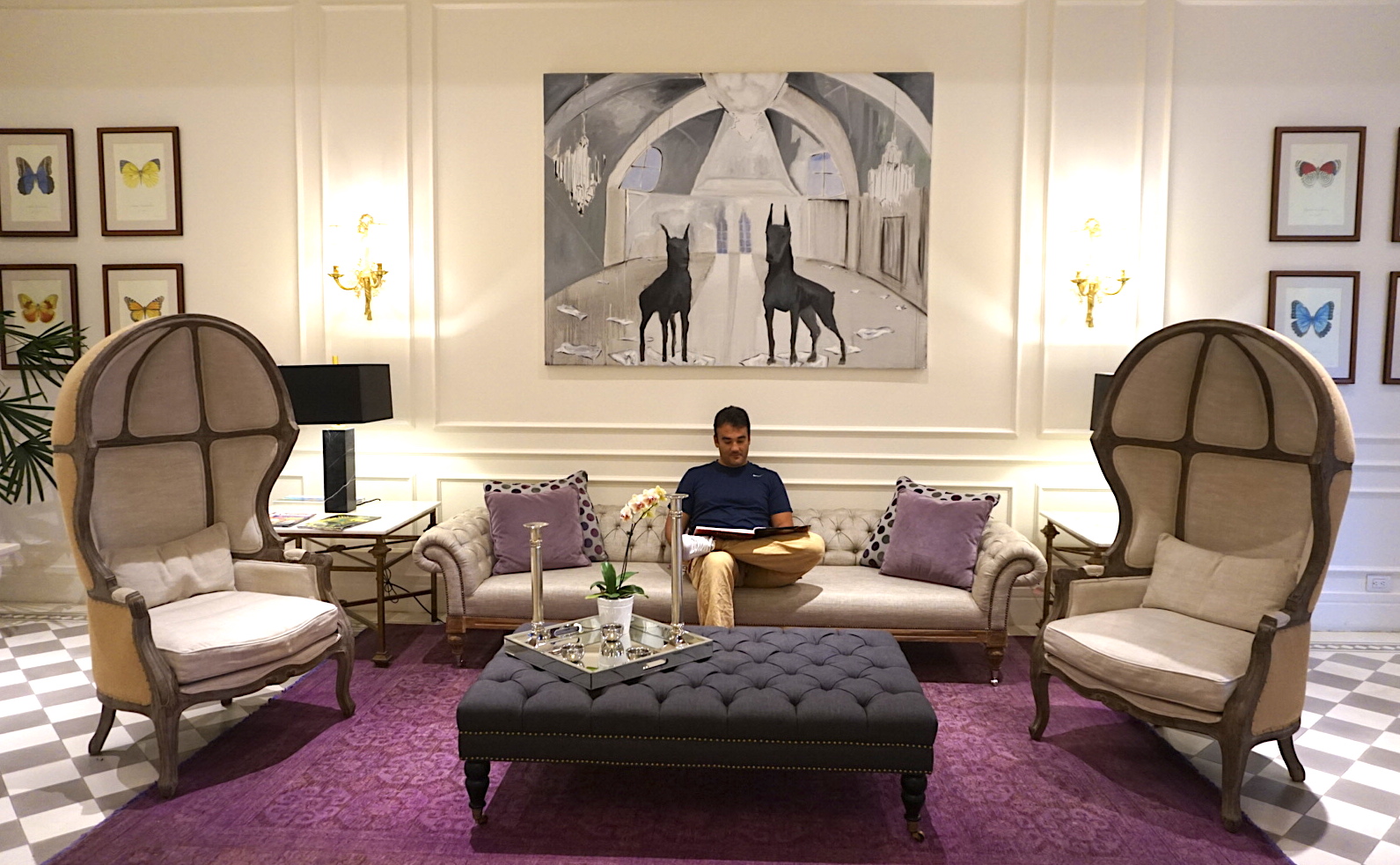 A few years ago, the hotel was a hospice, and since then it has been converted into a hotel with 44 rooms, on two levels, fully equipped with furniture made in Ecuador, in a modern yet antique style.

The rooms are decorated in grey and pastel yellow tones and truly impressed us. It’s a very unusual but incredibly cosy combination of colours that contrasts with and matches the exuberant tropical vegetation that surrounds the common areas.

Our room was on the second floor, it had a very high ceiling, which made it look very spacious. As for the music, there was something playing that sounded like Café del Mar and it was very nice. We lay on our bed while we enjoyed some of the sweets that had been left for us as a courtesy. 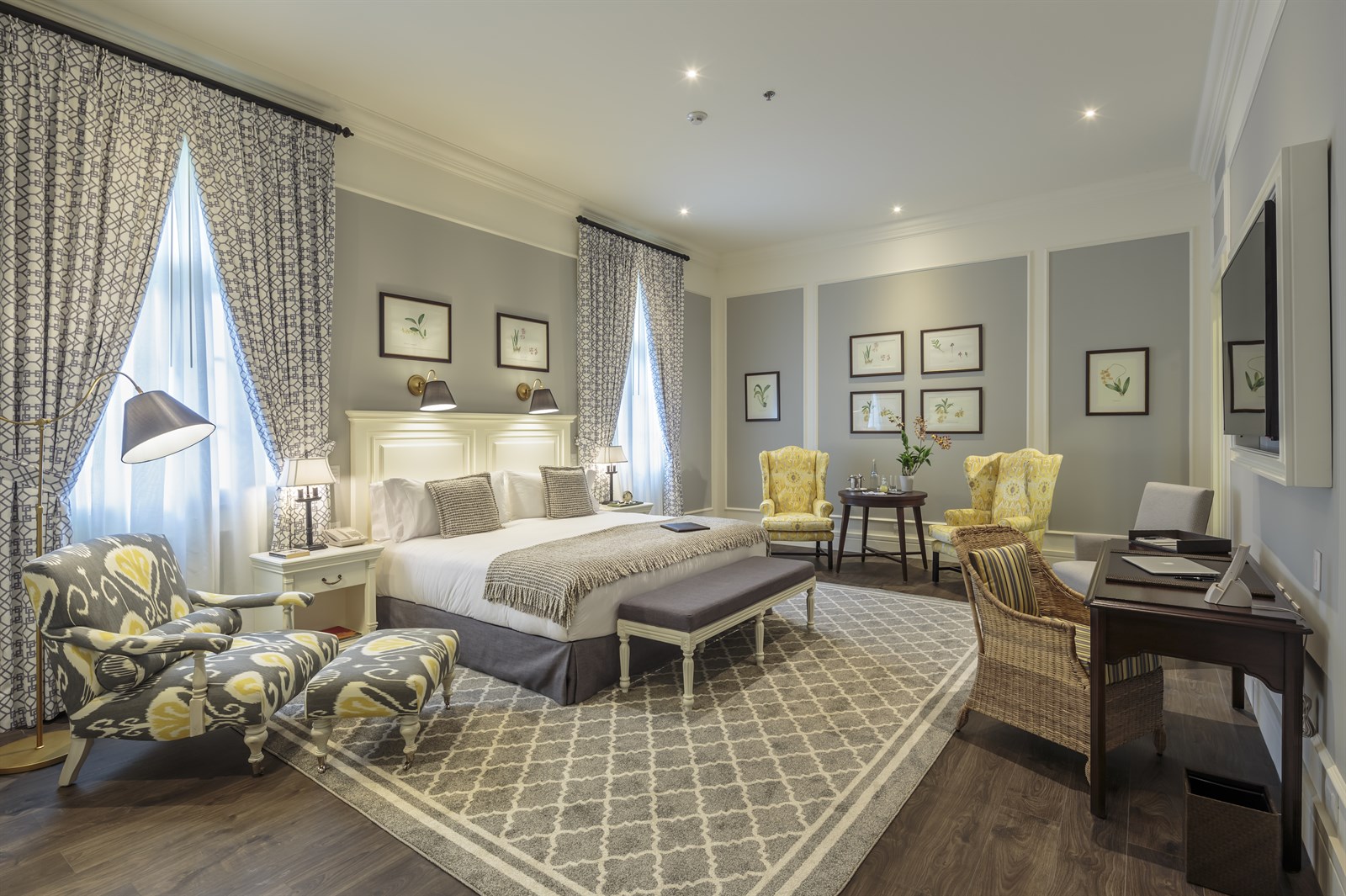 Of course, it took us less than 1 minute to turn on our phones and connect to the high-speed Wi-Fi that the hotel offers for free (very important for me!!).

Apart from the above, the room had all the luxurious details you could imagine: 58-inch TV, free coffee and tea station, mini-bar, dining table for two with huge armchairs, marble and glass bathrooms, Ecuadorian cosmetics, bathroom slippers, maid service, cleaning service twice a day, safe, etc.

The park is open to the public from Wednesday to Sunday from 9:00 am to 5:00 pm. The guests of the Hotel del Parque have exclusive access on Monday and Tuesday, but it was too late to visit and we had to leave it for the second day when we’d be coming back from our cruise around the Galapagos Islands. We ordered some food from room service and went to bed. 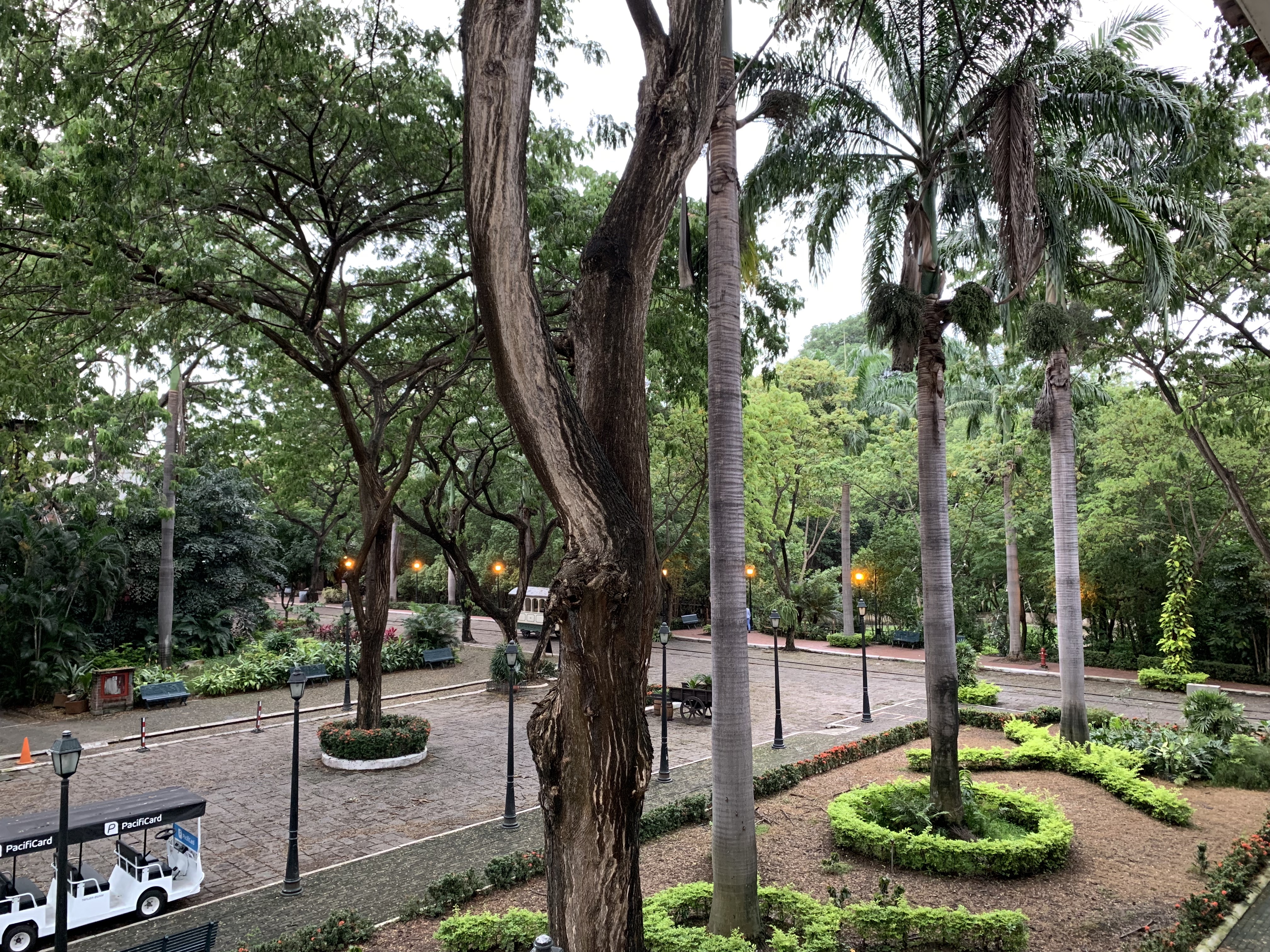 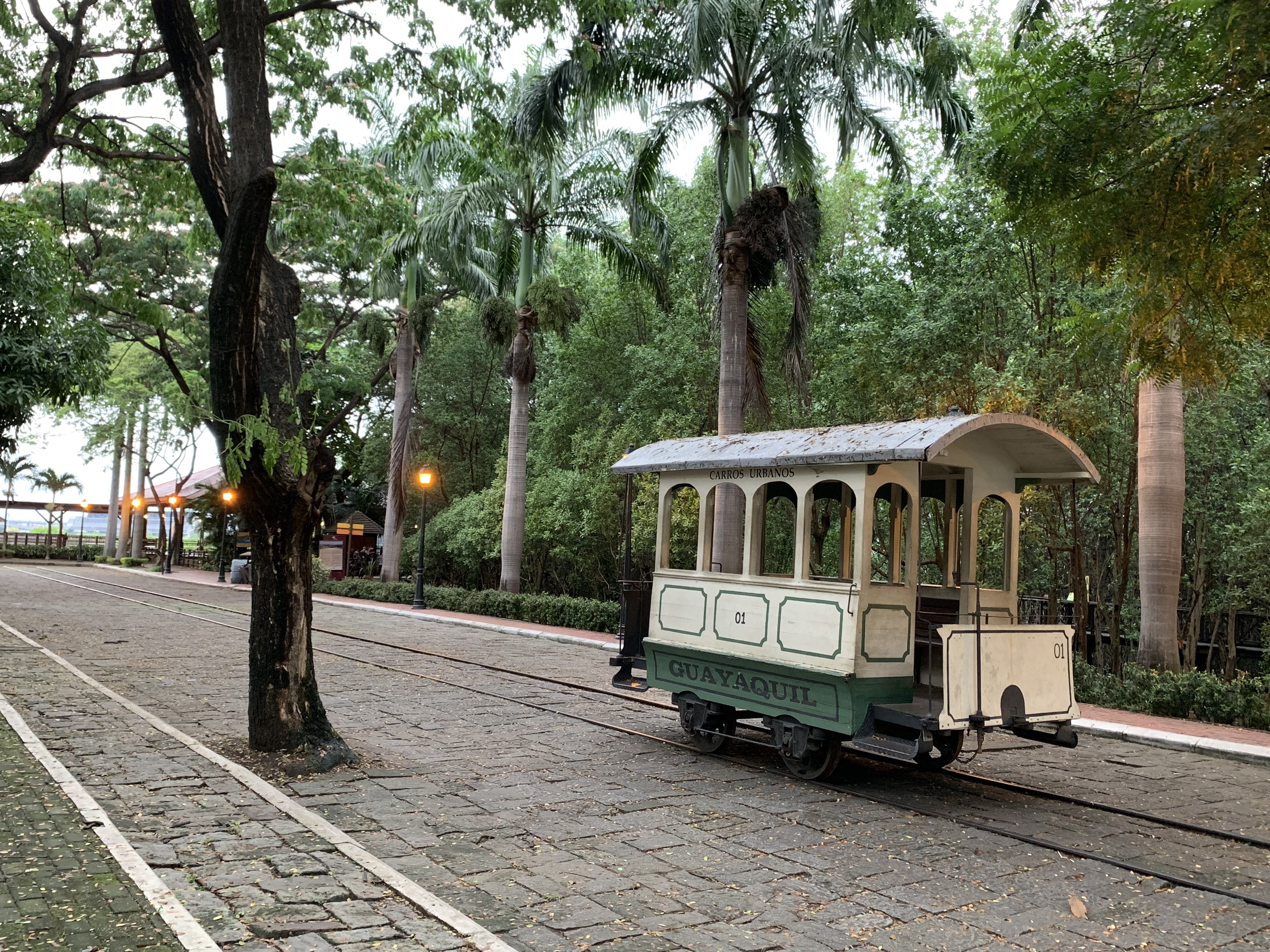 The next morning, we had breakfast in the main dining room, in one of the courtyards. The breakfast was mostly a nicely presented buffet with all kinds of fruits and everything one would expect from a 5-star breakfast.

Apart from this, the waiters took our orders for freshly-made fried eggs with bacon. We greatly enjoyed the experience while looking at the trees and tropical plants that fill the courtyard.

We quickly picked up our bags and headed to the airport to catch our flight to Baltra, the main airport for tourists visiting the Galapagos Islands.

After enjoying 7 days on our wonderful Xperience cruise through many of the islands, we returned to the hotel to spend our last night before catching our flight home. This time we had the opportunity to really enjoy the hotel.

The first thing we did was to eat at the Casa Julian restaurant, which is located in a renovated building from the 19th century and that has incredible views of the Daule River. There we enjoyed a very pleasant evening, as we watched local families going for a stroll.

After, I booked a massage in the spa that is located in the same area as the gym, but in a very quiet and private space… in the “bell tower”, which is made entirely out of wood, with a view of the park.

It was an extraordinary experience, as the windows were left open to hear the sound of the rain that fell during sunset. It was totally recommendable… We then went back to order room service and went to sleep.

The next morning, we returned to breakfast in the same place, in the courtyard full of plants and with the sound of chirping birds. There we met the director of the hotel, Francisco, a very attentive person who was interested in our stay and what we had to say about the hotel. 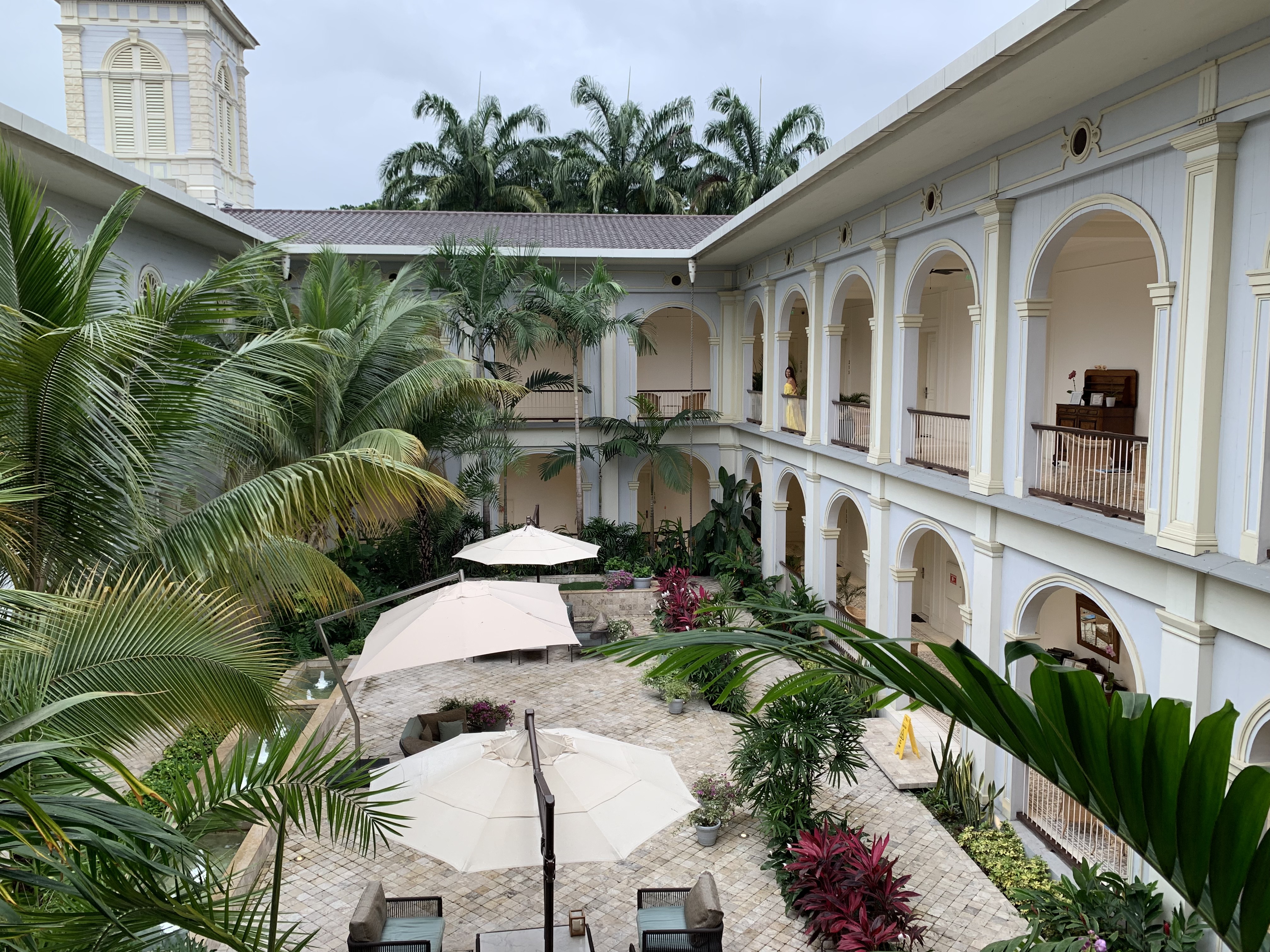 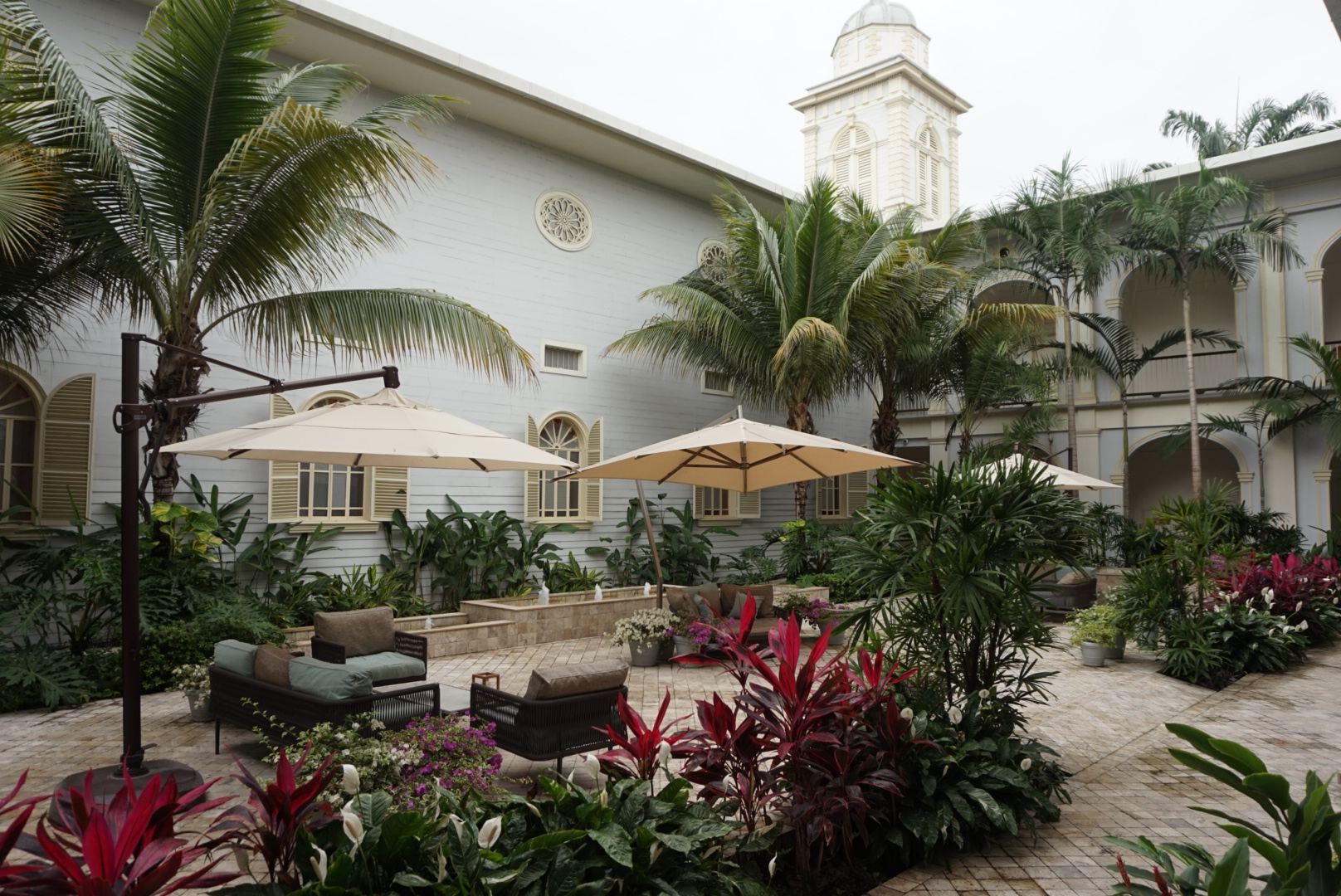 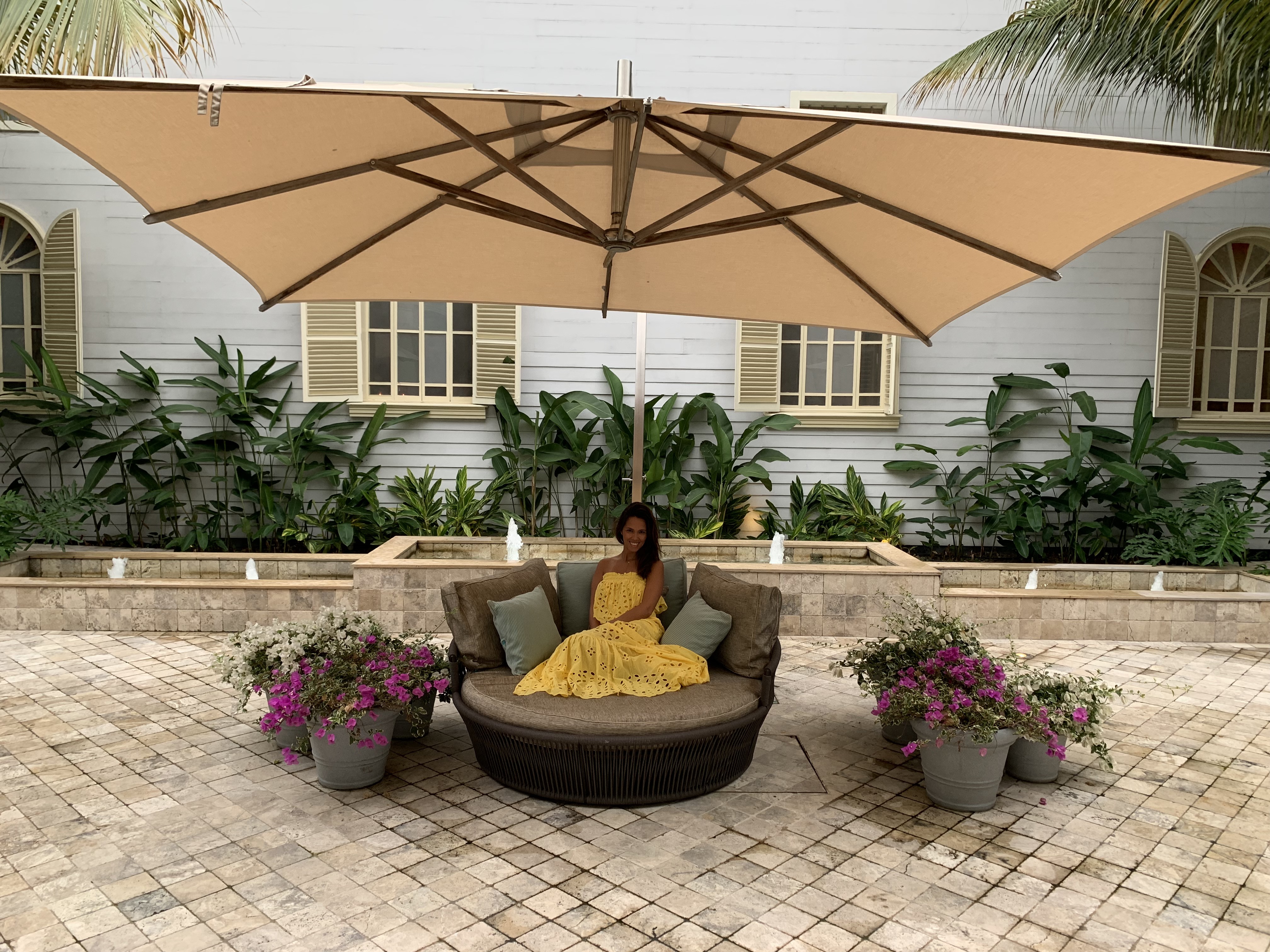 We asked for a late check-out, since our flight was at night, and we were given the okay with no problem. I must say that the hotel’s customer service is a 10 out of 10. The lobby, the bellboys, the waiters and the management were impeccable at all times.

That same morning, we went on a three-hour private tour that took us to see all of Guayaquil. The most memorable of all was the Cathedral and definitely the Malecon, which is truly on another level. 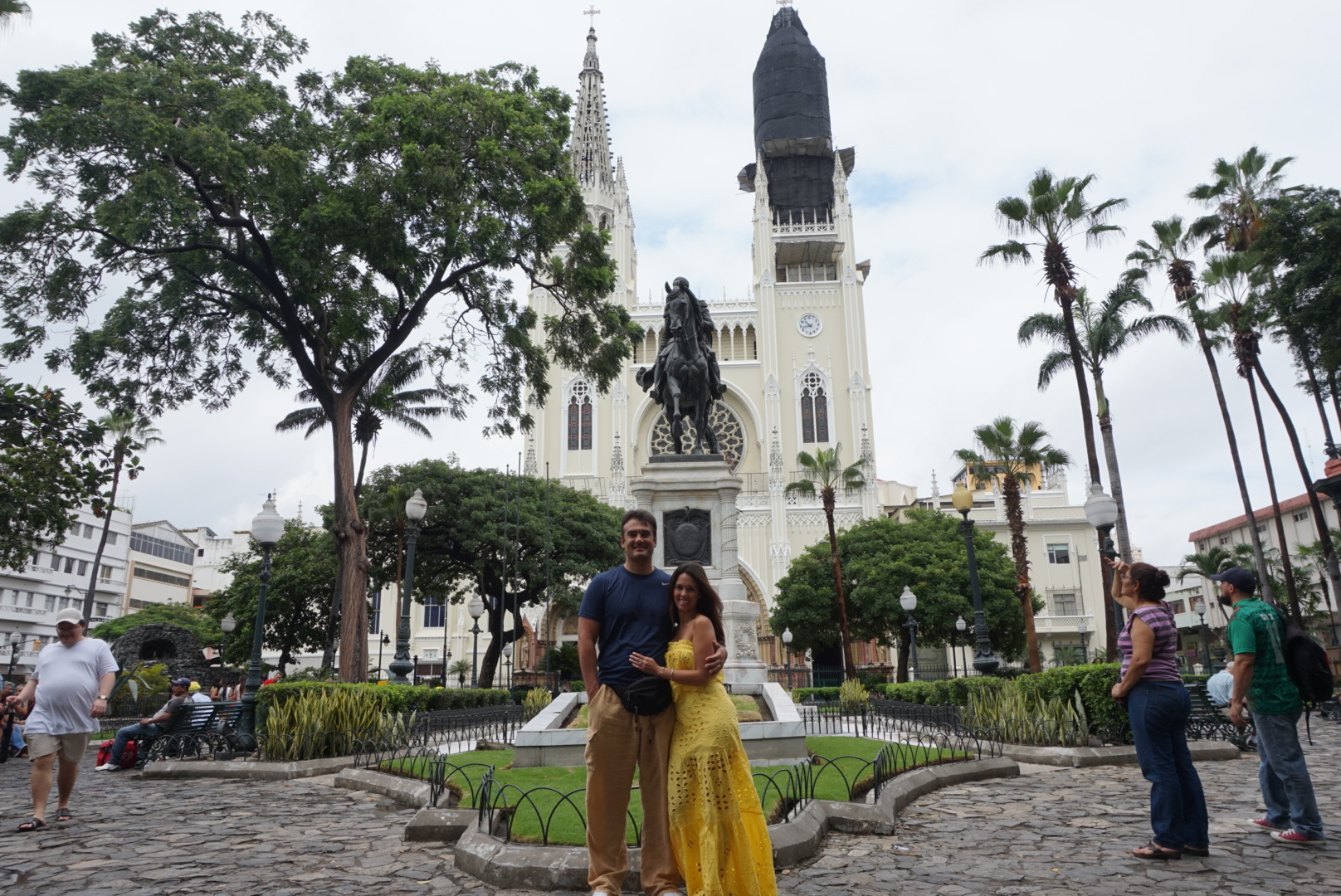 We went for a walk around the hotel and through the park. Although we didn’t use them, there is a team of expert guides, in addition to those offered by the park, who can explain everything related to it.

Also, if you have enough time, there are a number of cultural, culinary and nature experiences available to guests: a visit to the wildlife sanctuary, a chocolate and coffee roasting experience, and an introduction to Ecuadorian medicinal herbs.

We visited the church that was inside the hotel and it was really impressive. When they told me about it, I thought that it would be a chapel, but it could really pass for a church. There was nobody inside, but it was perfectly lit up and with religious songs. 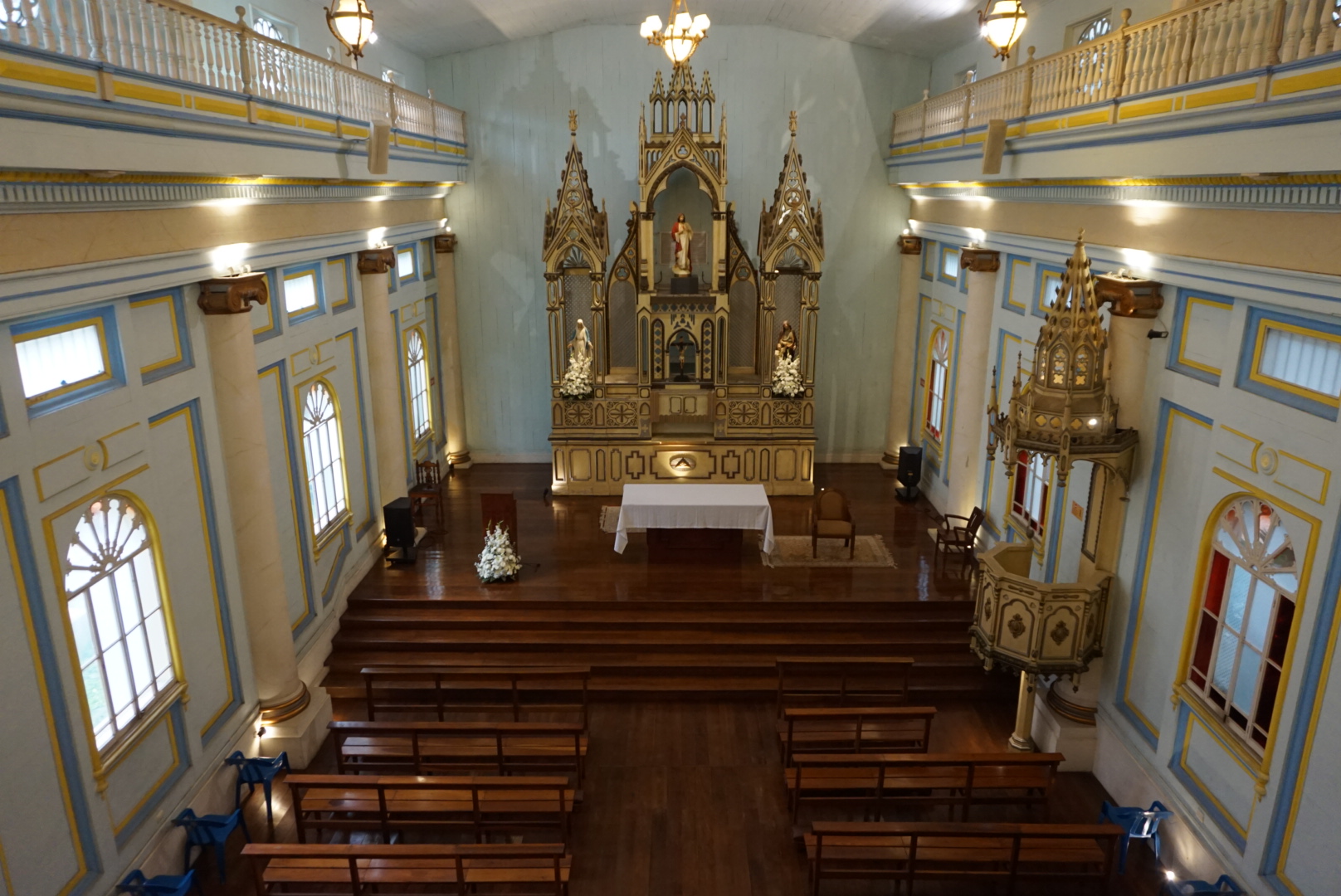 After leaving the room, to kill time before our departure, we went into the hotel’s VIP room. This room is huge, with columns and two desktop computers that can be used by clients (like a business centre), food and drinks, television, sofas, tables, etc.

It was completely empty and we were able to relax and work a bit before saying goodbye to this wonderful place. 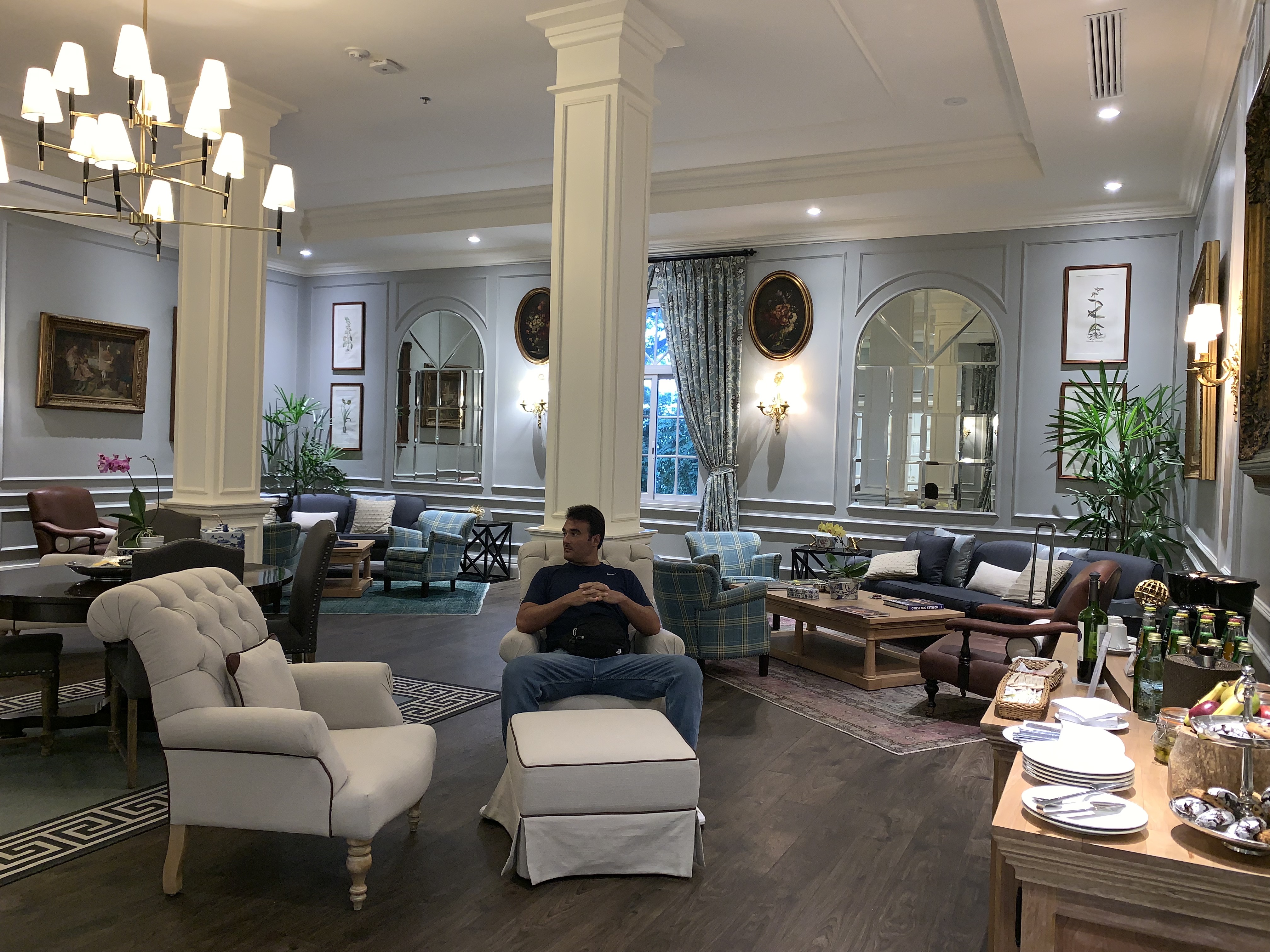 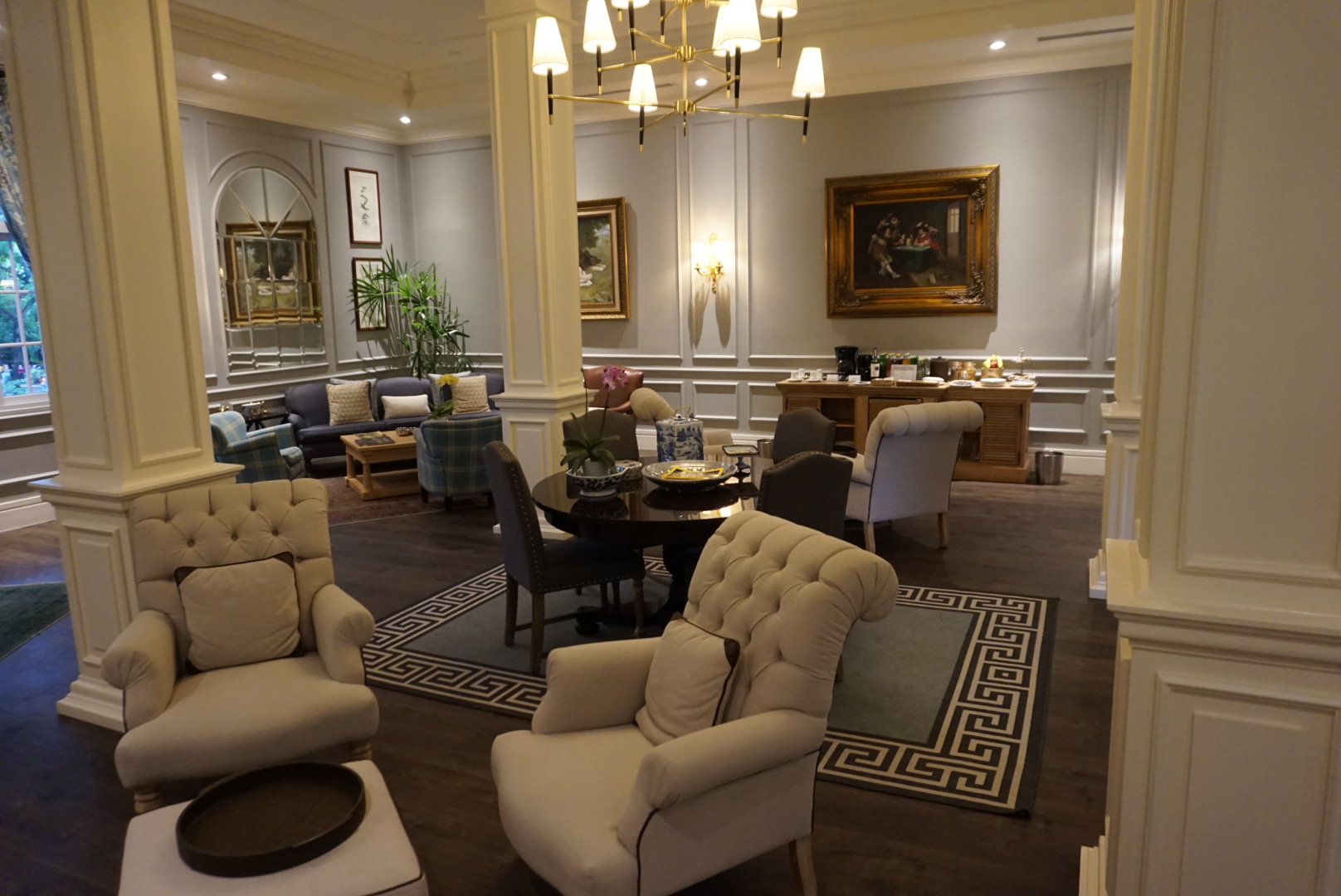 When the time came, we went to the lobby and had them call a taxi for us. While it was on its way, we took our last pictures in order to show our families this wonderful work of colonial art.

Finally, we said goodbye with a hint of regret for not having been able to spend more time at the hotel, since two nights are definitely not enough to fully enjoy this place.

Hopefully, one day we will be back!!